Go back into and repeat. 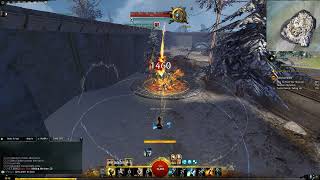 The Weaver elite specialization allows for a versatile mobile source of damage, crowd control, and utility in a WvW zerg.

Due to the high number of ranged skills available, you will be the main source of damage from a distance, and often the highest source of damage overall in the squad. Weavers also perform well in melee range, thanks to frequent evades and access to .

This is perhaps the most challenging DPS spec to play in WvW, however, once mastered you can be sure you will relish its capabilities.

As with other damage classes, you’ll have the best overall damage output by casting your skills as close together as possible, and synchronizing your damage with boon removal and CC from the rest of your squad.

The order of skill priority is then and finally crowd control abilities. should be used to add even more burst damage to your meteor combo.

Most organized groups will be trying to coordinate on voice via Discord or Teamspeak. A commander may call for skills to be used such as , , , and finally , make sure to pay attention to these calls and use the necessary skills to line up your damage and crowd control.

Predicting where and when an enemy group will push, and using your skills in response, will allow you to provide constant pressure. Positioning your abilities accordingly is very important for your effectiveness, as this build utilizes a lot of stationary pulsing area attacks.

The range of Elementalist’s high damage skills, in particular , is invaluable for destroying defensive siege inside of towers and keeps.

In addition to great damage, Weaver has excellent evades in its kit, be sure to familiarize yourself with all of its skills available!

Attunement priority will always be due to trait modifiers which enable you to have a massive boost in extra power. When you double attune to fire you will get a further 5% dmg modifier and another power boost thanks to and .

Paying attention to the cooldown of is key to keeping up , which is a 10% damage modifier with 10 stacks. Due to pulsing damage and reduced cooldown with , is your second highest source of damage, make sure you use this skill every 5 seconds and take advantage of it!

The skills which should always take priority are , , , and . Your offensive utility should also be used when in double to add even more damage to your spike.

You may place this twice on occasions before swapping attunement to maximize your damage.

Your auto attack, is not only 1200 range, but it also explodes on impact hitting up to 3 targets allowing you to hit targets at a slightly bigger range. Remember to fill in gaps in your rotation with this skill, but beware of reflects as this is a projectile.

You can use for the evade or to gain distance from the enemy before using other damage skills.

is your number one priority AoE damage skill, any movement will cancel its animation so be sure this doesn’t happen. Swapping attunements or casting other instant abilities however will not interrupt this cast.

It is critical you do not get interrupted when casting as this will reduce your damage significantly, a great way to do this can be to use and then cast  right at the end of the animation, this means you will evade gaining distance from the enemy before casting meteor and the actual location of the meteor shower will be even further.

Note: Allow Skill Retargeting setting must be off for this to work if ground targeting is set to Instant cast.

Thanks to you gain extra ferocity and reduced cooldown on all skills, and most of them offer great utility.  You can and damage 5 enemies with or up to 10 enemies with the ranged field from .

is a great tool to cleanse movement-impairing conditions like , , and from allies, while giving them . Using it will also increase your damage with .

will launch a slow-moving projectile that explodes on impact, beware of any reflects and projectile blocks. This skill is not a priority but if you can see a window of opportunity use it.

Your elite will give you a new weapon bundle instead of your current weapon when cast, when used properly these skills provide movement utility and great damage.

This skill is the reason you take FGS as an elite, adding this skill into your damage burst to spike harder, you can drop FGS once used and go back to the normal rotation.

Two movement skills in the  bundle are (which is a good movement skill leaving a fiery line behind you) and which is an evade that also does great damage while spinning and slashing foes.

Staying outside of melee clashes is usually your best bet to stay alive since you are squishy and don’t really need to be in melee anyways, but if you find yourself in trouble, you have a few utilities that can help you survive.

For example is a stance ammo skill that , evades, and gives you , and  is a 900-range teleport (Note that you may use this skill to teleport whilst being stunned, but it will not break the stun).

And if you need another dodge, swap attunements to activate

can be used if you are not getting enough from your party, this will also boost your defenses with a  permanent -10% incoming dmg buff.

can be used if you prefer a bursty heal with the addition of extra at the expense of losing some condition cleanse.