The Watchknight Triumvirate have a somewhat limited arsenal of attacks compared to other encounters, but their strength lies in their ability to coordinate and overlap their mechanics with one another, causing the fight to quickly spiral out of control if not handled properly. Furthermore, the encounter boasts three puzzle phases that will wipe the entire squad if done incorrectly.

During every DPS phase of the fight, the Prototype Watchknights are fought in the same order: Vermilion (Red) Arsenite (Green) Indigo (Blue). The Watchknights that are not the current target in the sequence will have

Ley-Woven Shielding and consequently will take zero strike and condition damage; the squad should focus on the unshielded boss in order to progress each phase.

As the Triumvirate does not gain new attacks as the fight progresses, this guide will outline their attacks and mechanics first, then explain how each phase plays out in the Encounter Walkthrough section.

The Watchknight gains a defiance bar and covers the arena with a large red Danger Zone and a corresponding safe zone. Each Watchknight has a unique shape for its Danger Zone.

Any player caught in a Danger Zone when the attack detonates will be instantly defeated.

Breaking the defiance bar will invert the positions of the safe and dangerous zones, but will not make the attack detonate faster.

Malfunctioning Ley-Woven Shielding, which will and them the next time they lower their shielding and become vulnerable.

Note: It’s not always advantageous to break a Watchknight’s defiance bar in the DPS phases, especially if the group has already reacted to the Danger Zone and has moved to the safe zone. Be careful with your crowd control (including soft CC) if a Danger Zone is not to be inverted, as the bosses’ defiance bars are not large. 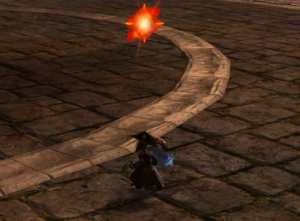 Each Watchknight will fixate on the closest player to them: depending on the phase, fixation will either happen directly after they detonate a Danger Zone or right after they land on the field.

The boss’s fixated target will be notified by a special sound effect and a colored diamond above their character’s head.

Prototype Vermilion and Arsenite are melee attackers and will follow the fixated player—in fact, both bosses cannot attack at all unless they are on top of their target. Prototype Indigo, on the other hand, is a ranged attacker, pelting its fixated target from afar with arcing lightning. Indigo will never move from its position once on the field.

All three Watchknights have attacks that, when complete, spawn a boiling puddle of magic on the ground which slowly expands from its initial point of origin.

While expanding, the puddle does light damage to players, but once fully expanded, the puddle will glow more brightly and will deal heavy ticking damage to any players inside of it.

Boiling Aether will spawn on the first instance of each of the following attacks, and every other instance of the attacks afterward. These attacks always occur at the end of each Watchknight’s auto-attack chain, so watch their animations!

A red ring will spawn around Prototype Vermilion, with white arrows pointing either inwards or outwards. Standing in the red ring will players and them toward the boss.

Each player should stand on the side of the ring indicated by the arrows. Incorrect positioning will cause damaging Gravitational Waves to emanate from the boss—one for each player out of position.

At the very start of the encounter, both sides of the ring will be designated white. Players should always stack in the inner section at the start to make sure this mechanic is synced between the entire squad. Once the mechanic has resolved once, the white area will be on the opposite side from where the player stood the first time; this back-and-forth will repeat throughout the fight.

Handling more than a few waves can put a lot of pressure on the squad’s healers, especially later in the fight; do not ignore this mechanic!

Whenever mobile and not doing Dual Horizon, Prototype Vermilion will instead do a hammer auto-attack chain instead, with its final strike—Gravity Hammer—being more powerful and affecting the indicated circular area.

On the first instance of Gravity Hammer, and every other instance afterward, a Boiling Aether puddle will spawn directly under Prototype Vermilion.

Vermilion’s fixate should make sure it uses Gravity Hammer on the edge of the arena, in order to keep Boiling Aether out of the center where it will be more of a hindrance. After the puddle has spawned, the fixate can move the boss along the edge to give the squad space to continue attacking.

Prototype Arsenite spawns a red pool under itself and sucks players in, telegraphed by cascading AoEs that grow fainter as they get further from the boss.

Standing in the red pool will players and deal heavy damage, but even remaining just outside the pool will still put players under a lot of pressure as the ticking damage from the vortex increases the closer players are to the boss.

The ticking damage from this attack can be .

At the end of its first auto-attack chain (telegraphed by a poisonous mark on the boss), and every other chain afterward, the farthest player from Prototype Arsenite will gain a bright green tether and a mobile red ring around their character.

The boss will then send out a green disc to the marked player: when it connects, a Boiling Aether puddle will spawn under their feet and the disc will then return to the boss in a straight line from their position.

This mechanic can be baited by a knowledgeable player, who should position their character away from the arena’s center in preparation for the Boiling Aether puddle.

Contrasting Prototype Arsenite’s Vortex, Prototype Indigo spawns a bright red ring at long range and blows players away, telegraphed by cascading AoEs that grow fainter as they get closer to the boss.

Being in the bright red ring will players and deal heavy damage. The ticking damage from this attack increases heavily the further away players are from Prototype Indigo, so players should stay close to the boss while it’s active.

The ticking damage from this attack can be .

After four auto-attacks, Prototype Indigo will spawn blue wisps and Spread AoEs on three players. These players must quickly move away from each other. At detonation, anyone within multiple Spread AoEs will take large damage; being in only one deals minimal damage.

After the first Tri-Bolt, and every other instance afterward, one of the three players will also randomly be selected for the Tether mechanic, which will spawn wherever Tri-Bolt struck them and also spawns a delayed Boiling Aether indicator at their feet.

The Tether will teleport the selected player back to its location once the timer above their head expires. The Boiling Aether puddle will be placed just before the teleport, so the selected player should run to the edge to place the puddle there first.

In the first phase, the Watchknights each fight solo. Each boss will drop from the sky, activate their Danger Zone, fixate on the closest player, then will transition to boss-specific attacks until they reach 80% health.

When Prototype Indigo reaches 80% health, the squad will face their first puzzle phase. During these puzzles, all three Watchknights will drop in and channel their Danger Zones, which together cover the entire arena. Players must create a safe zone by breaking one of the bosses’ defiance bars, inverting that boss’s safe and dangerous zones.

After a defiance bar is broken, the other two bosses become untargetable. If the incorrect Watchknight is broken, there will be no safe zone and the squad will wipe.

The three Watchknights are essentially fought solo in this phase, however, the bosses will not start with their Danger Zones. Instead, while fighting one Watchknight, another will drop in and assist the active target with their own Danger Zone instead. The small orange Exhaust Plume AoE that spawns when a Watchknight is going to drop in will instantly defeat players, so avoid standing in them at all costs.

Your squad will need to choose between running to the safe zones or breaking the additional boss’s defiance bar to swap the danger zones.

Since, during this phase, the Watchknight channeling the Danger Zone is always the next one in the DPS sequence, also consider that breaking their bar will them right after you’re finished with your current target.

Once Indigo is brought to 40% health, a second puzzle phase will commence.

The encounter ramps up in difficulty in this phase, as you will now face two bosses that will be fully active simultaneously; both will fixate on the closest player when they drop in.

As stated before, each boss is vulnerable in the same order as the previous phases (Vermilion Arsenite Indigo), and the shielded boss will not become vulnerable until the current target is brought to 10% health and flies away.

The vulnerable target can use all of their attacks, while the shielded one will only use their auto-attack chain (and the associated extra Puddle mechanic, whenever it’s time in the pattern), unless under the effects of Power Transfer. 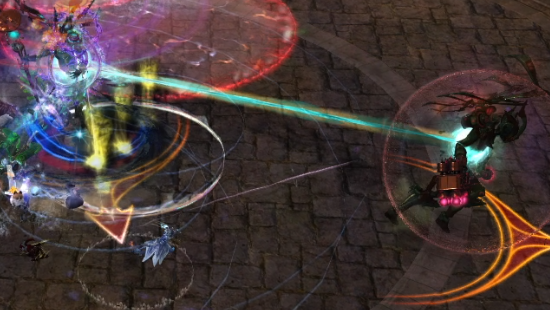 When nearing each other, the bosses will gain a brown tether: this is your warning to keep them apart, as if they get closer they will gain a blue tether and

Fixates should aim to keep all active Watchknights apart to avoid powering the bosses up, but should focus on staying alive first and foremost.

The remaining Watchknight will periodically drop in and perform its Danger Zone mechanic. Handle the three boss duo variations as follows:

Once Indigo is brought to 10% health, the final puzzle phase will commence.

For the 10% puzzle, break Prototype Indigo’s (Blue’s) defiance bar. This will create a white glowing safe area next to Prototype Vermilion (Red).

In the final phase, all three Watchknights will be active simultaneously, and will not use Danger Zone. As in Phase 3, fixates should bring Vermilion and Arsenite to the edges of the arena (and away from Indigo) to avoid them gaining

Power Transfer and prevent Puddles from dropping in the center.

As always, only the current Watchknight in the DPS sequence will be vulnerable until defeated, so the squad should focus Vermilion down first, then Arsenite, then finish off Indigo to complete the Strike Mission.