The fractal starts on top of a wooden platform overlooking a lake. This entire fractal will take place underwater.

Dive into the water below and engage groups of Krait defending caged fishermen. All Krait by each cage needs to be killed before you can open them, don’t forget to interact with the cages to progress.

After freeing both fishermen you will be presented with one of two paths that change daily.

Players will be transformed into dolphins in which you must safely traverse through dangerous waters to reach the next checkpoint. You have 4 skills in this form:

Echo: This reveals any hidden Krait nearby and reveals a path of water spirals.

Rush: Gain a burst of speed. Passing through revealed water spirals reduces the recharge of this skill..

Retrieve Ally: Revives and teleports a nearby downed dolphin ally to your location.

By using the Echo (1) skill it will reveal a path of water spirals which is the shortest path to the end of the ruins. passing through the water spirals reduce recharge of the Stealth (3) skill by 10 seconds. 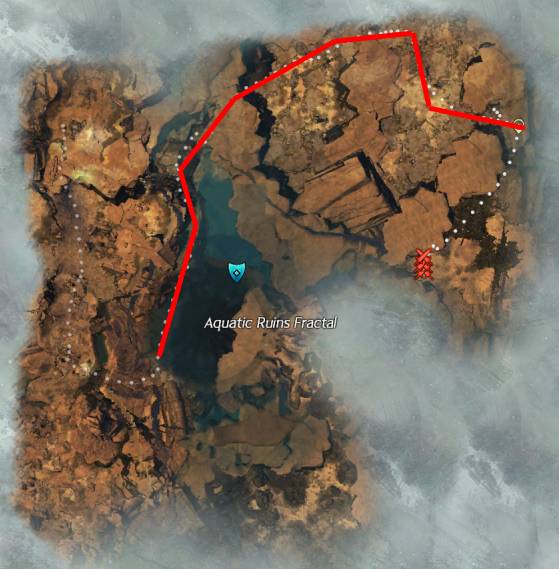 Around halfway through the path, there will be a portal similar to the one at the beginning of the dolphin path which turn you back to normal. There will also be a Champion Krait Warden and veteran Krait which must be killed before being able to continue.

Players will journey deep into the waters requiring light sources obtained from Luminous Plants. These plants emit light and protect you from dying to Piranhas of the Deep. You’ll need to traverse from the light source to light source until you reach the next checkpoint safely. The player holding the light source will get a skill called Lifeguard to teleport down players and revive them and heal alive players

If you do not have any source of light nearby, Piranhas of the Deep will strike you, constantly taking chunks of your health! To find the correct way, follow the Mushrooms on the floor.

Once you’ve finished your path (Dolphin or Darkness) you will be able to reach the final boss of the fractal: large jellyfish with four phases of repeating pattern.

Boss has a very strong CC attack so is extremely useful during this fight.

Players can be ‘eaten’ by the jellyfish which requires you to press a sequence of skills from 1-5 in order to break free.

Every 25% the boss will phase and become invulnerable. An elite Krait Diviner will spawn which you will need to kill in order to begin attacking the boss again. As long as a Krait Diviner is alive you will take constant damage. They can be easily found by the beams connecting the Krait and Jellyfish Beast.

This pattern repeats with an increasing number of Krait Diviners spawning every 25%, from 1 to 3.