You will play as an Inquest, start the fractal by interacting with the detonator to blow a hole in the wall. You need to get to the center area of the platform above taking the staircase to the right. Destroy the elite Flame Legion Fire Shaman to start the next phase of the fractal.

Next, you will need to disable 4 colliders. There are multiple rooms where you can find these: South, West, East and North-East. There is no order in how to do them but all 4 must be done to engage the final boss.

Because this is the only room new groups can struggle in, and it requires the whole party to do proper damage, groups will commonly start with this collider. After moving into the area, you’ll trigger some dialogue, and moments later Champion Subject 6 will spawn.

Subject 6 has no invulnerability phases, but will occasionally channel a block, you can tell it’s blocking when the ooze will squish itself in a form of a shield. During that block, Subject 6 will gain stacks of ‘Overload‘ if players continue to attack him. Reaching 20 stacks and over will result in the party taking significant damage. Stow weapons or stop attacking to avoid this.

After losing 5% of its health, Subject 6 will spawn small blue Oozes from the outer parts of the room that slowly make their way to Subject 6, healing it for 5% upon reaching champion. Additionally, starting from tier 3 of this fractal, big Golden Ooze will spawn every 25% of Subject 6 health, similarly, it will slowly go to the boss, healing him for 25% of HP after reaching the center. Golden Ooze will have much more HP and an additional breakbar.

A most common strategy to handle this boss is to simply kill Subject 6 before Oozes will reach it. In order to do that, your group will need to have enough dps, and you will have to “bait” shield phase before DPSing Subject 6 to 95% (before spawning first Ooze).

Players will usually auto-attack Subject 6 waiting for the shield phase, and when the boss can be attacked again group will attempt to “one-shot” it before any of the Oozes can reach it.

If you are not sure about your group dps, one or two of the players may be assigned to Ooze duty, they will be killing the Oozes and slowing them down with everything they have, and if Golden Ooze will spawn, CCing it and DPSing it down as a priority.

The only other threatening attack that Subject 6 can perform is its bouncing AoE attack, you should step off the AoE, but it is possible to outheal this attack.

After the fight, interact with the collider and pick up the cooling rod, carrying it to the Heat Room.

Note: In more experienced groups, after this room is done, the group will split, sending 1 DPS player to the Dormitories, 1 high mobility class to the Heat Room (this person should take the Rod), and the rest of the group will do the Maze room.

In this section, you will have to rescue lab members within a time limit before they die. Players will have to destroy multiple doors to free them. Some rooms will contain portals that must also be destroyed.

You should prioritize rescuing Chibb and Greeza as they both apply a stack of debuff on the final boss, increasing damage taken by 5% per stack.

Once all rooms are members are secured, the final door in this section will open containing a collider, interact with it and carry the cooling rod to West Room. 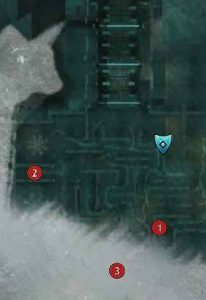 When entering the room, you should pick up one of the shields located on the left and right sides before the maze, which will protect you from turret attacks.

Take care when moving around the maze as there will be golems that can aggro onto players which will chase and damage you, use your shield, , and avoid the golems.

The room has 4 switches in 3 locations, you will need one player at each location to disable the collider, the person interacting with switch #1 will open access to switch #2, which then will open the gate to switch #3. Make sure you spam your switch until you can confirm another player has moved into the next room.

In the last location you’ll find 2 switches, interacting with one will lock you in place so you can’t interact with the second one, and both need to be activated at the same time. But if you will stand directly between them, click with your mouse on one, press F, then click on another, and press F, you’ll be able to switch them both off.

Again, after picking up the cooling rod, bring it to the Heat Room.

All the cooling rods you have collected will significantly help with traversing through this room.

When carrying a Cooling Rod, your skills 1-5 will be changed but 6-0 will remain. You will be granted a shielding ability (#2) to protect you from heat while carrying a rod and movement speed increase ability (#1) to move a bit faster.

While not protected from the heat, you should hold down Skill #1 to stack a movement speed boost, at the same time use any and all defensive and healing skills you can, to sustain yourself.

On the sides of the room, you will see Cooling Rod Receptacles which provide a safe area against the heat once interacted while carrying the rod.

There are two strategies here:

There will be 2 switches in the chamber room, interact with both of them to disable another collider, both can be interacted with by one player in a similar fashion to the last switch in the Maze room. After interacting with both switches you can disable the collider between them

After disabling all 3 switches, groups is usually scattered all over the place, by using /gg they will respawn in the center of the arena near the switch that will portal them to the final boss.

Players will have a special action key: Hex Shield which prevents platforms underneath them from disappearing.

The boss will tag players with a laser mechanic which will trigger platforms underneath that player to highlight, and eventually disappear.

You can try to kite outside the arena with this mechanic so that the rest of your party can continue to DPS the boss, but the usual strategy here is that players will say numbers 1-5 representing the order in which they should use their special action key and will stack on one tile DPSing the boss.