Enrage: 9 minutes. When Enraged, all four cannons will be instantly activated and Sabetha will deal 500% outgoing damage.
Requires: 2 players with Glider Basics

In this encounter, players must defeat Sabetha before the platform collapses due to intermittent Cannon fire; if the platform health reaches zero, the squad will wipe.

Sabetha does not require a toughness tank but does require that a few players take on special roles, namely to deal with Cannons and Flak Kiting.  At 75%, 50%, and 25% HP remaining, Sabetha will leave the platform and one of three minibosses will take her place.

Before reaching The Skillet and engaging Sabetha, the squad will need to clear out lesser bandits along the route. All of the bandit types except for the Sappers should be aggroed and eliminated in each of the three sections after Gorseval; squads will usually stack in certain locations to break the ranged bandits’ line-of-sight and force them to stack close together for easy pickings.

Sapper Bomb to activate: the affected player should use their special action key while aiming at the jump pad to send all players up. Players can then lower the nearby platforms to create a path for any squadmates that were left behind.

The closest player to Sabetha will occasionally receive a

Time Bomb. When Sabetha is under 50% HP remaining, the two closest players will get Time Bombs.

On detonation, these bombs do massive damage to all players besides the target, including downed players.

Players targeted by the

Time Bomb will receive a notification on their screen, in their chat, and a sound cue. The detonation animation is slightly misleading—the bomb detonates earlier than it appears to.

Players targeted by a Time Bomb must leave the stack. Do not dally when you get this mechanic, as it explodes quickly, however be careful that you don’t blow up your squad’s Flak Kiter or Cannon players in your rush to get away.

Every 45 seconds, Sabetha will target a random player with a large red arrow then lock in place. She will then unleash a deadly Flamewall that slowly rotates counterclockwise around the arena and instantly defeats anyone in its hitbox.

This attack cannot be or blocked, and will also kill any players attempting to glide over it.

Players should avoid moving through the Flamewall at all costs: this means reviving downed players before the wall one-shots them, avoiding skills that randomly teleport, such as (Mirage Axe 3), and cleaving down the randomly-spawned Bandit Thugs who can players into the wall.

To minimize the movement required by the squad, and to also make space for the Cannon players, players should always stack in between Sabetha and the next Cannon in the sequence. The Flamewall will do a single 360 degree counterclockwise rotation, so once the red arrow is set in position, players on the boss can stack behind the arrow then follow the wall for a brief moment to remain completely safe for the duration of the attack.

Starting at 75% HP remaining, Heavy Bombs will begin spawning on the platform around Sabetha. If ignored, they do substantial damage to the platform. Any player can, and should, approach them and use their Interact key to kick the bomb off the platform and prevent this damage.

Throughout the fight, Sabetha will regularly target the furthest player on the platform with a flak attack. This attack will leave multiple fiery patches on the ground that players and deal high damage.

One player, usually a ranged support, should stand away from the stack to bait these attacks.

Sabetha’s attack pattern is static (ignoring other mechanics): she will use two auto-attacks, fire a flak shot, and repeat. This means the Flak Kiter, if confident in their timing, can return to the stack during her auto attacks. In addition to Flak Kiting itself, the kiter can handle other mechanics, such as kiting

Throughout the fight, lesser bandits will spawn around the platform and act as nuisances. These include Arsonists, which deal moderate damage and with their flamethrower; Thugs, which can unwitting players into Flamewalls or even off the platform; and Sappers, which are the source of the

Sapper Bombs needed to deal with the Cannon mechanic.

At 75%, 50%, and 25% HP remaining, Sabetha will leave the platform and be replaced by Kernan, “Knuckles”, and Karde, respectively:

Sabetha will return when each miniboss is brought to 25% HP remaining, and depending on how quickly this is achieved, she can either delay or immediately use her Flamewall, so be prepared to deal with the wall while finishing off the miniboss at the same time.

Every 30 seconds, a Cannon will spawn on raised platforms in one of the four cardinal directions and begin firing volleys that damage both the platform and players. To dispatch these, Sapper Bombs (Known as a “green” or “green bomb“) can be used to fling designated players up to destroy them.

Shell-Shocked, preventing them from going to two cannons in a row, so two players should be assigned and alternate handling these cannons.

While only two people need to handle cannons, the entire squad should be aware of the mechanics to assist the cannoneers. Anyone can handle this mechanic, but usually two DPS or DPS-support players will perform this role.

The following videos show the mechanic from the thrower’s and cannoneer’s perspectives, respectively: 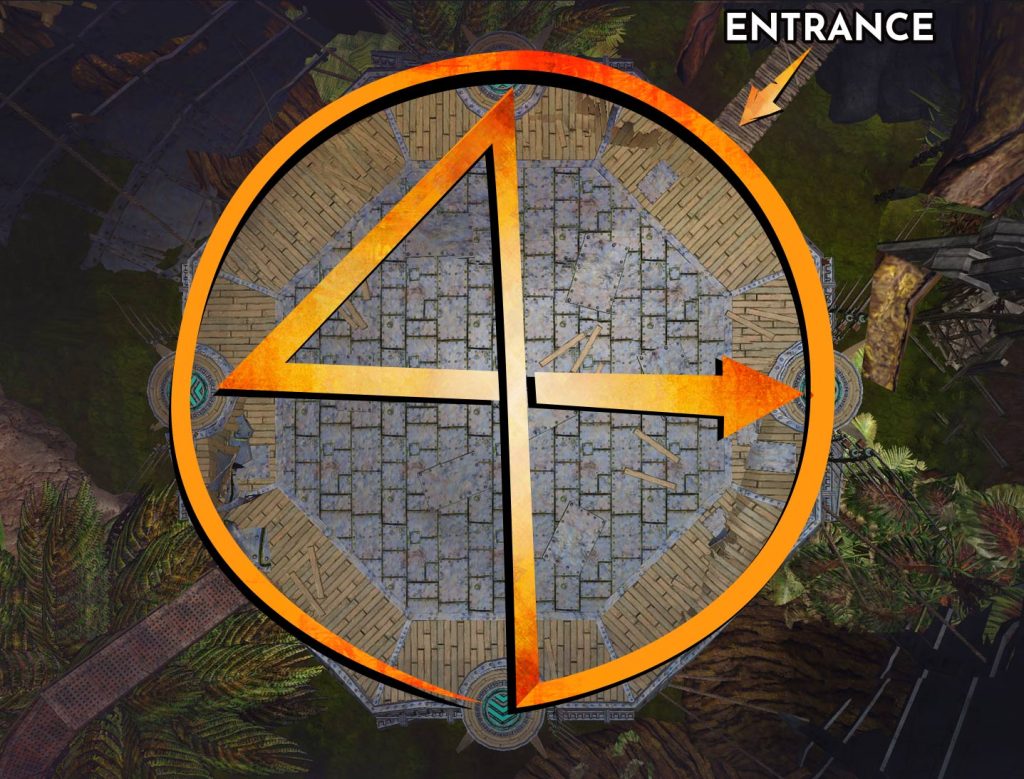 The cannons will spawn in the same pattern: South, West, North, East, South, North, West, East, starting 30 seconds into the fight, with 8:27 remaining on the encounter timer.

If a cannon is missed a backup can be sent, but the original cannoneer should not go late – jumping late will mean their cannon debuff will not wear off by their next jump.

By standing on the western side of the arena, the Flak Kiter can kite

Sapper Bombs as well; they should watch the Bandit Sapper’s animations to ensure they are within range when the sapper throws their bomb. The squad should stack tightly near the boss to avoid stealing Sapper Bombs from the Kiter, but must also be prepared to handle the mechanic in case they do get the Sapper Bomb.

A foolproof strategy to handle this mechanic without needing to remember cannon positions and timings is for players to watch their minimap and buff bar.

Outside of the Flamewall, the fight generally does not urgently demand players’ attention at any given time, meaning they have time to actively watch their minimap. Cannons (marked by

on the minimap) will spawn a few seconds before Bandit Sappers spawn in and choose their target.

marker appears, cannoneers can check their buff bars for

Shell-Shocked: if their bar is clear, they should get in position to get launched to the cannon. 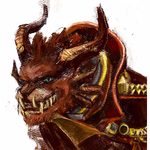