Bandit Trio only requires the squad have Basic Gliding and Bouncing Mushroom masteries. Additionally, at least one player must have the Nuhoch Stealth Detection mastery. This encounter benefits from pulls, cleave damage and crowd control; Mesmers with (Focus 4) are very valuable here, as are classes with lots of crowd control like double mace Banner Warriors and Power Alacrity Renegades.

After defeating Slothasor, players will take the Bouncing Mushrooms to a clifftop and glide past enemy bandits to a bounce pad to the left of the camp. After clearing some of the nearby mobs they can use Sapper Bombs on the bounce pad to land on a platform overlooking the camp. When players leave this platform the encounter timer will start.

In Bandit Trio, you will protect prisoners in a bandit prison camp by killing and interrupting adds and minibosses. The encounter’s mechanics are driven by a timer (found at the end of the guide) that starts when players jump into the camp.

Two items around the camp should be collected to handle upcoming minibosses: Beehives and Oil Kegs.

Note: use to drop interactibles, DO NOT use them. 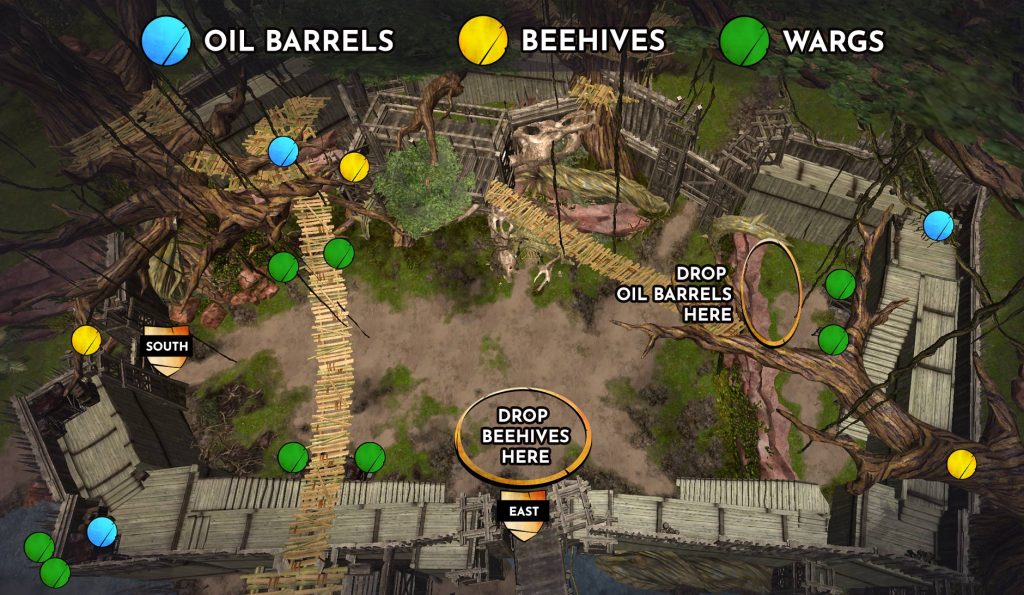 When these items have been grabbed the squad should stack tightly in the camp’s east gate to break line of sight with the bandit snipers around the camp. The snipers will move to the stack, allowing players to cleave them easily. Once the snipers are down players can squirrel around the camp cleaving down bandits and picking up remaining items.

Berg will spawn at 6:50 near the east gate. Berg is weak to bees – one player can use Beehives to give him a debuff. The debuff does not stack so additional beehives should be saved for if his debuff wears off. Berg does a frontal smash that can be cancelled by breaking his breakbar, but generally can be ignored – his attack is only a problem if it reaches the cage.

Once Berg is dead the squad can continue to clear the camp.

The first Bandit Saboteur will spawn at 6:03, marked by crossed swords on the minimap. He will run to place a bomb at the cage that explodes for 55% of the cage’s max health. This damage can be prevented by breaking a breakbar that appears as he is placing the bomb. One player with crowd control and the Nuhoch Stealth Detection mastery should be assigned to focus the Saboteur’s breakbar – he is only visible to players with this mastery. Often this role is taken by the Banner Warrior.

The player handling Mortars can break the Bombadiers’ breakbars, then bounce back to the camp without killing them.

Note: after the first set of mortars you can release 2 Wargs by the southern wall to help clear mobs.

At around 5:00 the squad should move to the south gate, opening Warg Cages around the gate at around 4:55 – the Wargs will do massive damage to Zane if he is bleeding.

Zane will spawn at 4:50 near the south gate and teleport to the furthest player, so the squad should stack tightly when he spawns. When he teleports he will drop an orange blind field on the ground – the squad should move south to avoid this orange area of effect. Zane will then fire three long-distance cone shots, with each shot increasing in damage. If these hit the cage they can take 50% of the cage’s max HP. By stacking south and sidestepping his cone attacks players can ensure that he does not shoot at the cage.

After defeating the boss player will have to take care another set of filler mechanics: Mortars (4:05), Saboteur (3:30), Mortars (3:04), and Saboteur (2:59). Be mindful that at 3:04 three Bandit Bombadiers will spawn instead of one. The player handling Mortars should be prepared to break all three breakbars. Revenants can do this easily by standing between all three Bombadiers and using when their breakbars appear, but any class with sufficient crowd control skills can handle this.

At around 2:55 the squad should move to the West gate because the final boss will spawn there at 2:47. The most notable attacks she has are firey tornadoes that aggro randomly and repeatedly CC and damage players. The best defense against the tornadoes is to avoid them, but stunbreaks and can be utilized.

Narella will also fire flak shots with burning areas of effect at the furthest player and shoot a flamethrower at the nearest player. One player should throw Oil Kegs onto Narella, causing her to damage herself. Each ignited Oil Keg stacks 25 on the boss, up to 50 stacks. The encounter will end when Narella dies.

At this point, players should continue to damage her while still being mindful of the remaining mechanics. Typically this will only be one Bandit Saboteur (2:29). This Saboteur can be stunned by using the Beehive’s active skill in front of the cage.

If Narella is low the next set of Mortars (2:15) can be ignored. Otherwise, the player handling Mortars should use the northeast jump pad, as one of the Bombardiers will set up at the platform over the camp. The other Bombadier will set up across the bridge.

Three remaining Saboteurs will spawn at 1:58, 1:28, and 0:58 but groups are extremely unlikely to kill Narella slowly enough to encounter these spawns.

If you want a cheatsheet, here is is a list of the exact timing of events during the encounter: