This encounter has no hard requirements. Players will suffer without Glider Basics but can technically complete the encounter.

Additionally, this encounter has many coordinated crowd control phases and can benefit from skills, sigils, and traits that increase crowd control.

Sabir will fixate on a toughness tank but this is more or less a formality as the tank will be stacked on the group at all times.

Finally, some of Sabir’s mechanics may not visually load if players model limits are particularly low. Players may benefit from raising their LOD distance and model limits.

From the Leystone Axis players will head west and clear Voltaic Wisps. Once these mobs have been cleaved they can attack a ball on a platform, pushing it through an archway to reach a large room.

Sabir will be standing up a flight of stairs. After some short dialogue players can kill another series of Wisps.

Each Wisp will spawn a bounce platform, propelling players to the next platform.

There will be one longer platform with slowly moving tornadoes that players can use to propel themselves onwards.

This will continue until players reach Sabir’s first platform. The encounter will begin when players approach Sabir.

Unlike almost every other boss the entire squad should stack in front of Sabir. Sabir’s auto attacks will apply stacks of Violent Currents, increasing players’ damage. After five stacks players will gain a special action key, Flash Discharge. This special action will teleport players and apply heavy breakbar damage.

Players should aim to break Sabir’s breakbar as quickly as possible to continue DPSing the boss.

This breakbar is known as “free CC” as players can use their crowd control skills freely. The squad should try to stack, continuously walk towards Sabir, and spam their special action skill Flash Discharge on cooldown.

Note: Paralyzation Sigils increase the breakbar damage of Flash Discharge. If your squad is struggling with breaking Sabir’s bar these sigils can help.

Once Sabir’s bar has broken, players will gain orange circles under them. Players should spread to avoid dying to overlapping detonations.

At 80% Sabir will stun players and leap to the next platform. This intermission phase is just like the pre-event with one notable exception. On the longer tornado platform there will be one orange death tornado. This tornado will one-shot any players within it; players must take care to walk or glide around this tornado.

Organized groups can skip part of the intermission phases by bringing a Mesmer with [portal entre]. However this strategy is very infrequently used in casual groups. 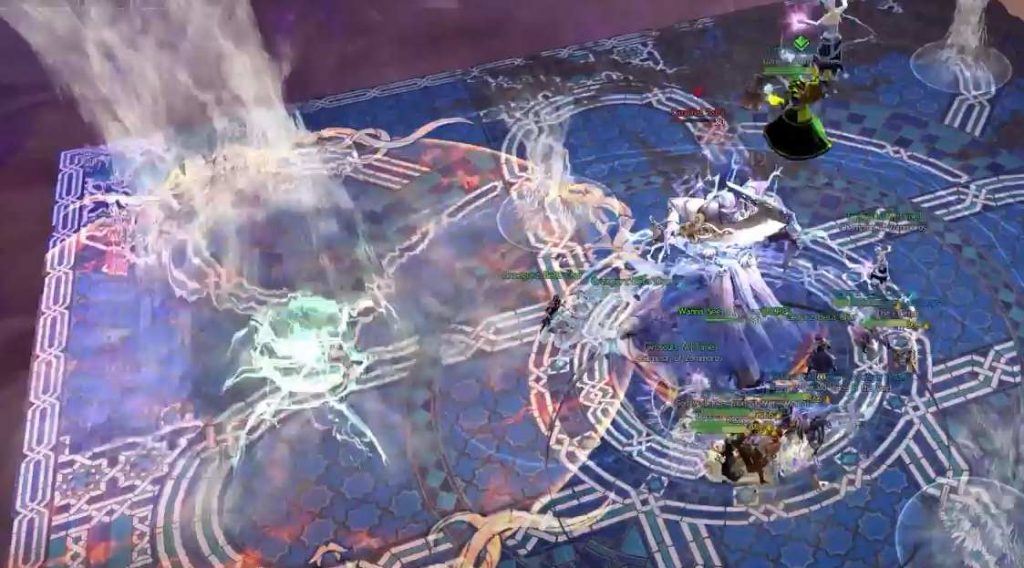 Tornadoes will spawn around the arena, circling clockwise on the platform. Touching these tornadoes will remove all stacks of Violent Currents, and should therefore be avoided.

At 75% health Cardinal Sabir will start to use his Unbridled Tempest attack. This is telegraphed by pulsing orange circles before unleashing Unbridled Tempest, a lethal wall of wind. Any players hit by this wall will go downstate. This can be avoided in three ways:

Until you are comfortable with this boss you should use the tornadoes around the room to avoid this mechanic. If any squadmates are hit, prioritize resurrecting them; Sabir’s coordinated crowd control phases reward as many players alive as possible.

Phase 4 is identical to Phase 2 with the exception of a second orange death tornado on the tornado platform.

Sabir will add a few additional mechanics in this phase.

Sabir will gain a breakbar, but not push players backwards. This bar is large and quickly refills. This means that players must coordinate their crowd control to break this bar. Typically, the commander will wait until ~six players have their special action skills, visible in the squad UI as light yellow borders around each players’ icon.

The commander will then spam a chat command in squad chat, and every player must use their special action key on Sabir.

If the breakbar is not broken players must repeat the process, waiting for enough players to gain their special action keys and mashing these on the boss.

Once this bar is broken players will face another spread mechanic.

At 50% a very large orange tornado will spawn on the west side of the platform, slowly rotating clockwise around the arena. Players must avoid this tornado. If any players go downstate they must be resurrected immediately to prevent them dying fully to the tornado.

Fury of the Storm

At 50% Sabir will occasionally attack with Fury of the Storm, as telegraphed by an expanding orange square. Two corners of the arena will gain bubbles, protecting players from this attack. Any players that do not reach these bubbles by the time Sabir’s orange square reaches the edge of the platform will go downstate.

As with all mechanics in this boss, prioritize staying alive over DPS uptime. If any players go down, resurrect them immediately to avoid them fully dying to the tornado or to Unbridled Tempest.

Wisps will spawn on a side platform to the west of the main platform at 40% of Sabir’s health. Additional platforms will spawn every 10% of Sabir’s health. Once killed, each platform’s Wisps will respawn after 40 seconds. One player with updraft gliding should use their special action key to teleport over to the wisp, breaking its breakbar and quickly killing it. This player can then use updrafts to return to the group.

Some squads will choose to ignore these wisps, bringing projectile mitigation such as   to avoid this damage. Otherwise they will assign one player, commonly a Banner Warrior to handle Wisps.

If you are handling the Wisps you must be cautious of Sabir’s attacks on the main platform. Namely, Fury of the Storm can knock you down in midair and both Unbridled Tempest and the tornado can kill you in your return glide.