We’ve explained a few basic things about Attributes (Stats) and Gear quality in our introductory guide and detailed equipment guide, if you need to learn about more GW2 systems and mechanics, make sure to give it a read:

Game systems and mechanics
Downstate, dodging, skills tied to weapon types, heart quests, and meta events, it all can be overwhelming for the new player. This guide attempts to answer all your questions, even those you don't yet know you have.
Equipment basics
You'll learn in some detail about what kind of gear exists, and what all the attributes exactly mean. With this basic knowledge, you will know what to look for in an item during leveling.

Now it’s time to get all that gear!

Your first step should be getting the right weapon, as it’s faster to get than most other items, then you should focus on getting the armor set, leaving trinkets for the last step.

Before we start, you should be aware that most healer builds and condition-damage builds use items that can be more expensive or harder to get than their power-based counterparts, and choosing interior stat combinations will simply cause you to underperform.

That’s why you should consider starting with Power build as your entry point to end-game instanced PvE content, as starter exotic Berserker’s gear is considerably easier to get. To make up the difference in stats, most importantly in Critical Chance, simply swap one of the sigils (usually ) with .

If you need to know what attributes, runes, and sigils combination would be right for your profession, make sure to take a look at our builds for each type of content.

Note: Due to exotic gear being soul-bound, we do not recommend getting it for multiple characters. Instead, gearing one character, start doing end-game content and immedialty go for account-bound ascended with end-game attributes.

Additionally, ascended trinkets, and even some weapons are so easy to get, that’s advisable to skip their exotic versions and go straight for ascended.

Gearing up to Ascended
This guide will give you a general overview of some unique properties of ascended items like stat-swapping, and of course, cheapest and fastest methods to get end-game ascended equipment.

A very convenient thing about getting your equipment in this game is that there are a lot of ways to do so. This allows you to play your favorite content be it PvE (Instanced and Open World), PvP, or WvW.

You can currently buy any type of exotic weapon and armor in the trading post, provided you have access to the appropriate piece of content. For example, to buy Plaguedoctor’s gear, you will need access to Living World Season 4 Episode 3.

Gear prefixes released with the core game, like Berserker’s or Rabid, are available to all players and can also drop from various sources like open world events, raids, fractals, etc.

For a full list of available prefixes and in which expansion they were introduced, as usual, consult the Wiki.

Let’s start with the most important takeaway from this section: we do not recommend buying your first exotic gear on Trading Post.

That’s because it’s currently very easy to acquire your equipment, sometimes only by putting a few hours to a day or two into it. And on top of that, exotic items will become soul-bound on use, meaning you can’t transfer them to other characters or sell them, you can only salvage them once you’ll upgrade to ascended.

If you don’t want to wait though, and you have some gold lying around, you of course can buy your first gear, but before doing so, you need to know how not to get overpriced items, and instead buy much cheaper alternatives.

Usually, new players will quickly look for a prefix on the TP to find the proper item, which is the worst thing you could do when looking for an item. More often than not, you will spend tens of times more gold than you would normally by doing so.

As an example let’s use searching for the “Berserker” chest armor piece, you’ll find level 80 armor pieces for 2

Instead, you can use a small gear icon near the search box and specify what stats you are looking for, what rarity, and for what level to find exactly the same chest armor, with different skin for as low as 30

, just without “Berserker’s” in the name. 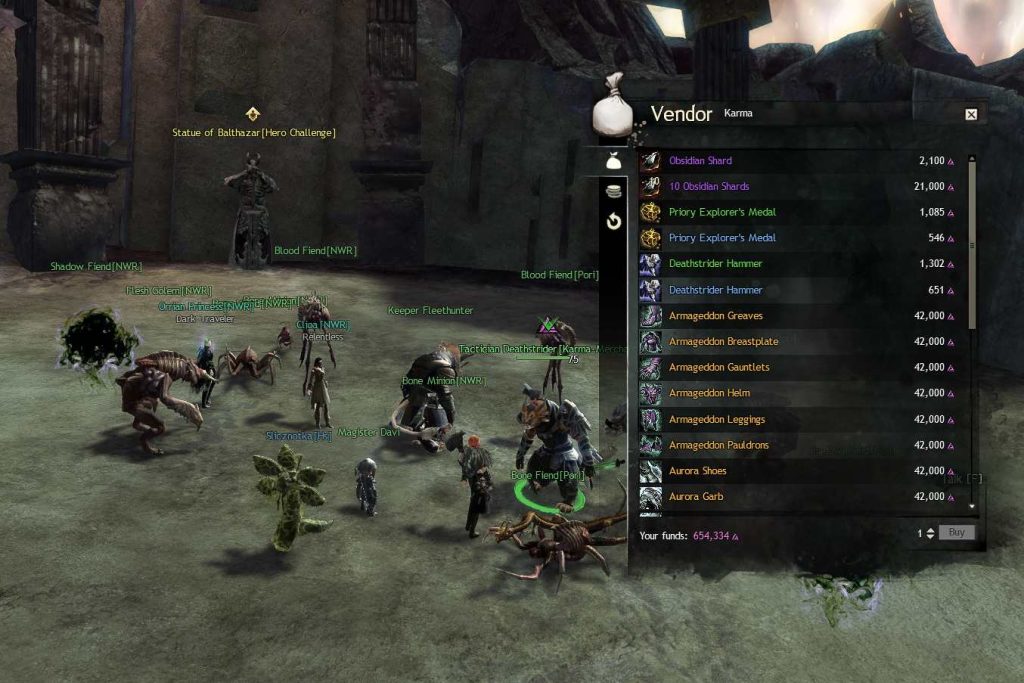 One of the best ways to get your first starter exotic gear is to buy Temple armor, which is available to buy for

Each of the vendors will offer a different stat to sell, and a full armor set costs 252,000

Karma, which is the currency earned by doing most activities in Guild Wars 2.

You can also buy a set of exotic trinkets from the same vendor also for another  252,000

Karma for the full set.

Note: Those items cannot be salvaged, consider that when placing any Runes in them as they will be lost. 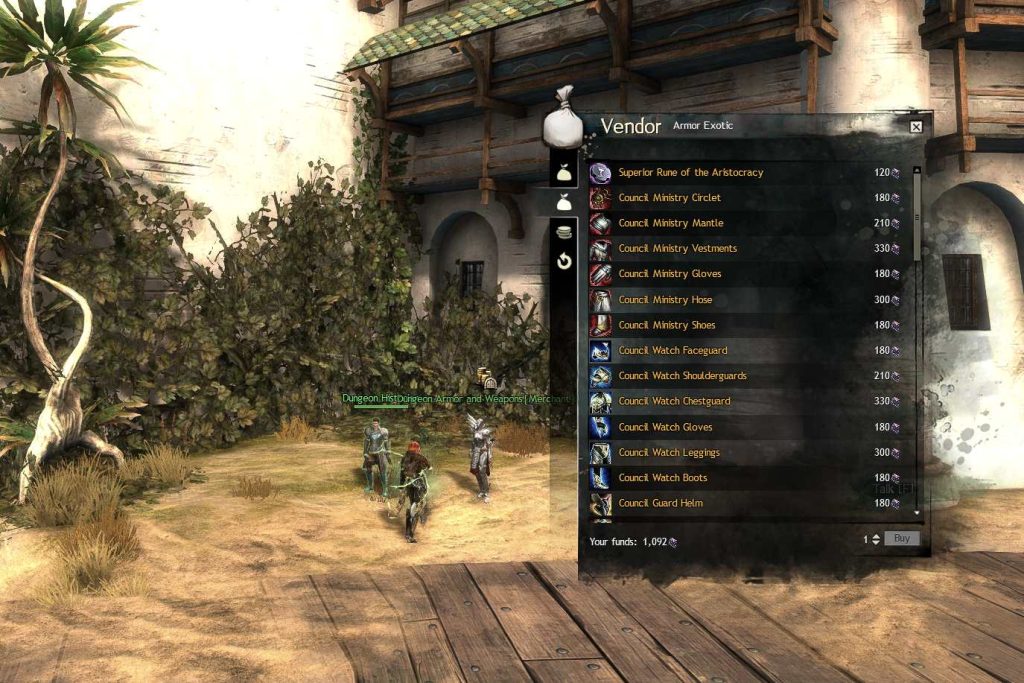 Dungeon Merchants sell weapons for Tales of Dungeon Delving, currency which is awarded for completing Dungeons in the story and explorable modes. Although those items have only sell core stats available if you were doing dungeons to level up this would be a good and cheap way to gear up!

One of the places where you can find Dungeon Merchant is Fort Marriner in Lion’s Arch copied.

Each dungeon category will offer items with different stats:

Note: As a bonus, each armor piece will come with superior rune thematically connected to the dungeon, those runes are often used in end-game content.

Realistically crafting exotic items is not worth the effort more often than not. If you’re going to craft armor for example, you’re better off going for ascended.

If you want to craft the items, you need to level up your crafting professions (separate for armor, weapons, and trinkets), which will cost you a minimum of 20

per profession (that’s assuming you know the optimal ways to level your crafting professions in the market at the moment of reading this guide).

That’s a lot of gold for a new player, and even if you already have the required level 400 crafting, often selling the materials required to craft the item and buying the equipment piece of the Trading Post might be cheaper. So before doing anything, compare the prices.

Non-core stats, like popular Viper’s and Harrier’s, are where things get a little tricky. There are some items that can randomly drop with those stats selectable in Icebrood Saga content, but fortunately, there is a great way to obtain a full set of exotic stat-selectable armor.

The and the Shoulders of the are two easy-to-access, stat-selectable sources of head and shoulder armor that can be purchased for <5 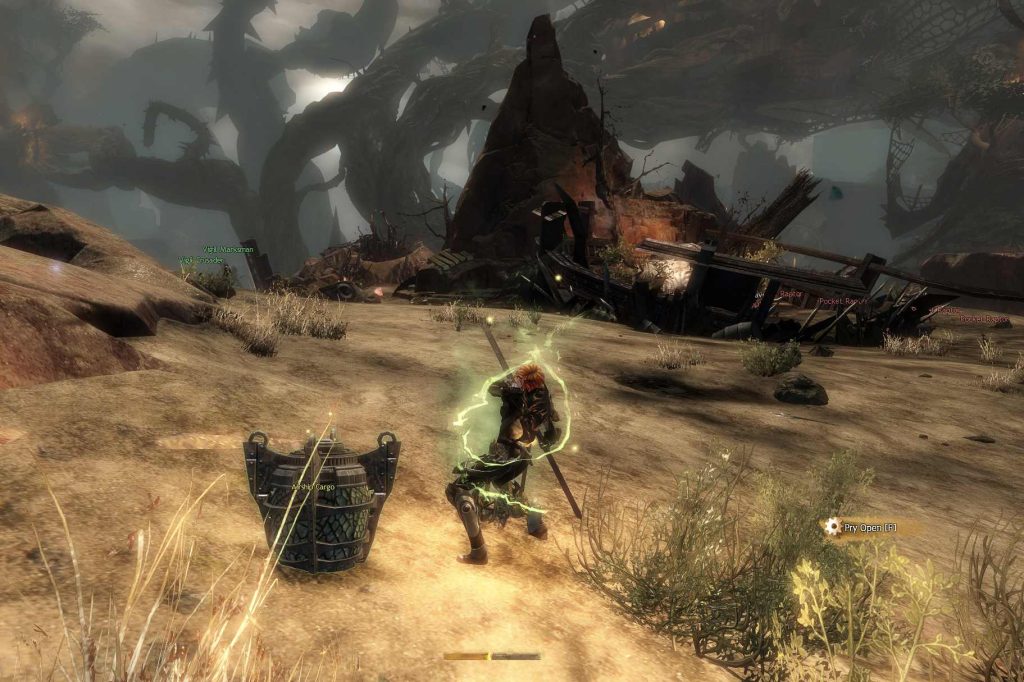 You need up to two day/night cycles of active participation in Meta Event for the whole set of Bladed Armor if you are actively tagging multiple different events and opening Airship Cargos.

A very nice bonus to that is you get around 15

in gold and materials for each day/night cycle.

, and you will be awarded a Chest item from when the map will reach tier 4 and you will have at least 100% participation. Additionally, can drop from Airship Cargo.

Note: Since Bladed Armor boxes are bought from Itzel Mastery Vendors, you will first need to unlock Itzel Language mastery in Heart of Thorns category. 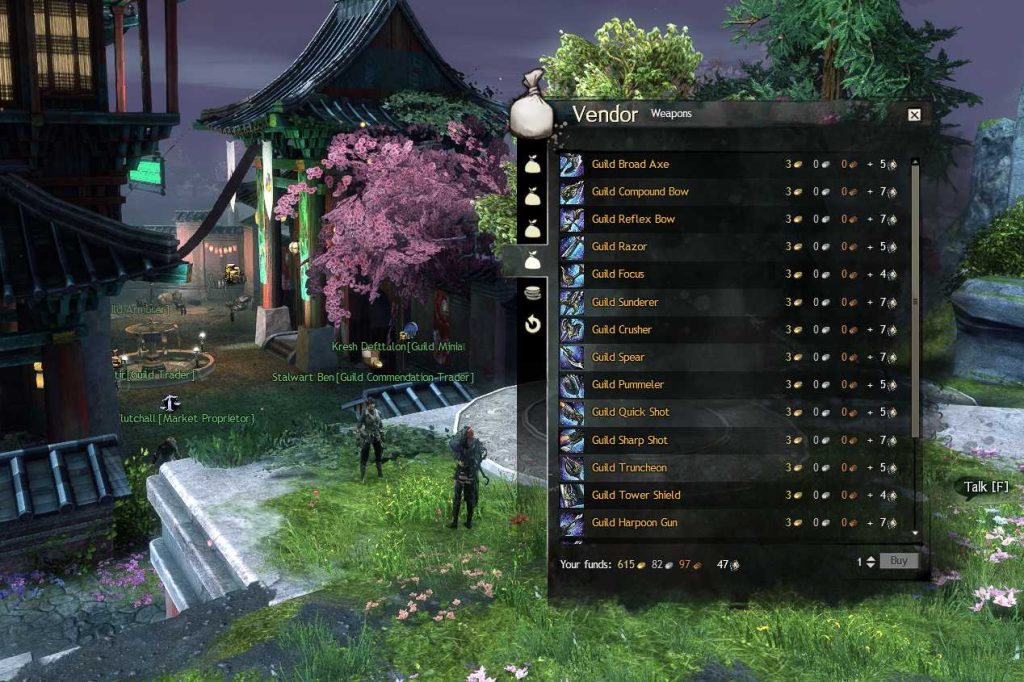 If you are in guild actively doing Guild Missions, consider saving to buy exotic guild weapons with Berserker’s stats for 3

While there may not be the cheapest to get, it’s very easy to get your first set of weapons for a power class.

This might be a bit controversial, you can get yourself extremely cheap exotic starter gear for PvE by playing WvW for . 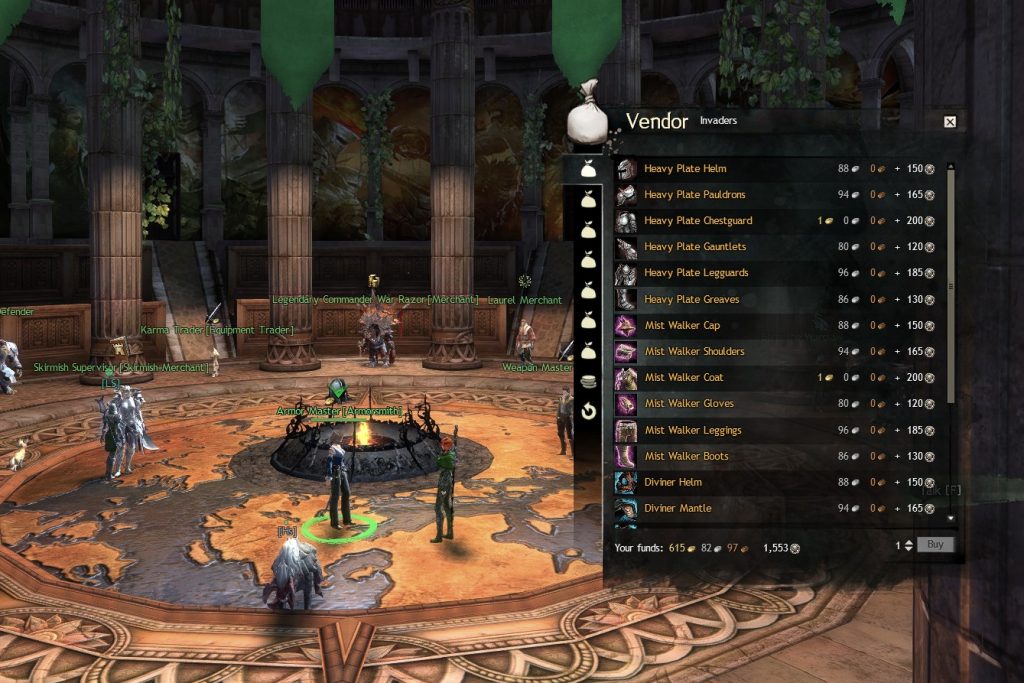 A full set of armor for example will cost you 5

Playing WvW with weaker equipment like rare is absolutely fine and doable if you keep it safe. Try finding a group in the game or on community discord like ours, or simply tag along a commander if there is one on your WvW map. If you’ll be able to keep yourself alive in your group, you’ll earn enough in no time.

Warlord’s Armor is also a very good way of getting stat-selectable items with Core, Heart of Thorns, and Path of Fire stats available.

This armor is acquired from . One box can be acquired every week by getting to the bronze chest in the WvW Skirmish Reward track.

Same as rewarded in WvW can be acquired after reaching each tier of the PvP League Reward Track but instead once per week, you get 1-2 boxes for completing each tier of the reward track for a total of 8 upon finishing non-repeatable Byzantium chest.

Additionally, in PvP Desert Armor can be acquired from , which is the final reward of the Crystal Desert Reward Track. The box allows you to choose a piece from 3 armor sets (Elonian, Bounty Hunter, or Warbeast), which are identical aside from name and appearance.

Those armor pieces are stat-selectable and will have all Core, Heart of Thorns, and Path of Fire stats available.

Another great way to get your first weapon is by starting training elite specialization. You will receive an exotic weapon of the type that specialization unlocks (eg: starting to train Scourge will award the player with a Torch).

These weapons usually have good stats to choose from and are worth using, at least until a better alternative is available.

If you are ready to start hunting for end-game gear, check this guide to get started on getting full ascended equipment or even just a few pieces to supplement your exotic items.

Gearing up to Ascended
This guide will give you a general overview of some unique properties of ascended items like stat-swapping, and of course, cheapest and fastest methods to get end-game ascended equipment.