Thief is a medium armor profession that focuses on dispatching your opponents quickly and (sometimes) quietly, using evasiveness and stealth as your defensive tools, and using your opponent’s strengths against them. Weapons of the thief include Daggers, Pistols, a Sword, and a Short Bow.

Most of your weapons will offer a mix of power damage and conditions applied, and even purely power damage weapons can be used in condition builds due to some trait interaction.

Your utility skills can be used for more damage, making yourself and your allies invisible, and dodging/reacting to the enemy’s attacks. In this guide, you will learn what it means to become a master of stealth, sneak attacks, and maneuverability with the following topics.

Thief is a relatively squishy class, thus you will be relying on stealing, stealthing, blinding, and weakening your opponents. Your attacks are based on “initiative” and don’t have a cooldown, and your one-hand weapons create powerful dual-wield skills.

The Thief’s first profession-specific mechanic is your F1 skill: . When cast, it will teleport you to a target within the 1,200 range and give you access to a stolen skill via F2 by default.

: Recieve all boons in the game

Another profession-specific mechanic is a resource called Initiative. Normally, every profession in Guild Wars 2 has cooldowns attached to their weapon skills (skills 1-5).

Thief trades individual weapon cooldowns for initiative requirements, which recharges at a static rate of 1 per second, and this can not be changed in any way.

Each weapon skill has an individual initiative cost assigned to it, and you can recast the same skill over and over again until you don’t have more initiative.

Utility skills do not have initiative costs and have individual skill cooldowns, but there are some skills that can help you generate more initiative in case you run low.

If you are using two weapons, your skill 3 will change depending on both of weapons. 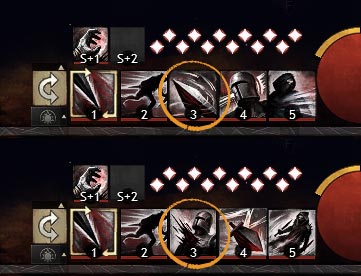 Thieves have the unique mechanic that’s changing weapon skill 3 depending on which weapons you have in your main-hand and off-hand slots.

Dual-Wield skills are usually most powerful from your weapon skills arsenal.

Your weapon skill 1 is normally an auto-attack, but while in , it will instead change to a one-time usable stealth attack.

Once you use a stealth attack or another skill that damages the enemy, you will receive the debuff.

If you are , you can not re-enter stealth until the debuff wears off, so make sure you are able to survive while .

When using a venom skill, your next few weapon attacks against a target will have a bonus effect. The Venom utility skills are instant cast while the heal and elite venoms have a cast time.

Venom skills are a very popular pick for end-game condition-based builds, and is being picked very often on fights that require breaking the Defiance bar as it’s shared with allies around you, dealing massive defiance damage total.

Deception skills are all about using , , or mobility to your defensive (sometimes offensive) advantage. If you feel that you need more survivability when fighting in the open world, slotting in more deception skills will help.

Among Deception skills you have two Stunbreaks in form of  and , skills that will break you free from “hard” Crowd Control effects like knockback, in addition, is great movement and escape skill.

An interesting fact about is it will reveal you if you’ll step outside of it early.

In Deception skills, one of the greatest strengths in Open World is which will protect you from enemy attacks.

Preparations are similar to traps used by other professions like Ranger and Dragonhunter, but Thief instead triggered when enemy will step inside the area, Thieves have full control of activating them with “flip skill” offering much more flexibility. There is no healing Preparation.

Outside , Preparations are not popular picks in end-game builds because they offer a low reward for relatively high cast time and high cooldown.

is often used situationally to teleport players around, even in some end-game encounters, but because it has a limit of 5 ports, portal is much more popular pick.

Signets have two parts to them: a passive and an active effect. The passive effect will be active as long as the Signet is equipped and not on cooldown.

Once activated, Signet will apply its active effect for a short duration, at the cost of disabling the passive bonus until the cooldown will finish.

Thief’s signets are very good skills used in multiple game modes. For Open World, of the greatest healing skills for a Thief is , in conjunction with you will be healed ridiculously fast as long as you keep attacking.

and are commonly used in most power damage builds, and contrary to most sigils across different professions that are usually only taken for their passive effects, is actively used in sync with your highest damage abilities due to extremely high Power it adds.

Tricks are all skills that help change the position of your opponent or yourself, allowing them to take more damage or deal less/no damage to you.

Due to the “trickery” nature of this type of skill, they are not very appealing in PvE in general, be that instanced content or Open World.

They are used in competitive game modes though, is a very strong evasion and condition cleanse skill on a very low cooldown, making it a great heal skill for PvP.

is typically not taken for the damage it offers, but for the very long evasion window it offers, making it a very good disengage skill for competitive mods

For Open World play, is one of the best Tricks you can pick, relatively long on a short cooldown makes it a great engage skill.

The Deadly Arts trait line is focused on a mix of power damage, condition damage, and utility. Thanks to the mix of the power and condition enhancements, it’s often selected for most offensive Thief builds.

Traits that offer utility include , , and .

The Critical Strikes trait line is all about power damage, large damage numbers via critical hits, the boon, and some minor utility as well.

is extremely useful during fights with a large number of enemies if you like to use signets, which will now give you bonuses when you kill something.

Shadow Arts mainly focuses on improving by adding healing, condition cleanses, or conditions to it.

While most traits are defensive, some offer life stealing (, , ), which not only will heal you but will increase your damage, as life stealing is treated as an additional damage source.

If you are with a group of people who lack sustain on their builds, you can choose to heal/support them with traits like , , and . If an enemy you are facing gives itself boons regularly, you can always take to remove them and potentially fear your target.

This specialization is rarely picked in the end-game PvE as there is usually no real need in using . It is however useful in competitive game modes, where Thieves often heavily rely on .

In Open World you might find it useful in Dungeons to improve your stealthy traversing between objectives, or as a defensive tool when dealing with particularly dangerous enemies.

The Acrobatics trait line is, arguably, your most selfish specialization. Everything here revolves around dodging using endurance, evading using utility, and weapon skills.

In general, Acrobatics is the least used specialization in the game for Thieves because you can gain the same benefits through other more controllable methods.

In Open World, a niche use case might be when fighting a particularly tough enemy with well-telegraphed attacks. Extremely high uptime from and with enhanced endurance regeneration via can make you very evasive even in a long fight.

Trickery is a great specialization for general Thief play. All minor traits (, , and ) are very powerful for both Power and Condition-based builds, but you also have multiple options to make infinitely better with the boon generation or conditions applied while stealing.

The most popular all-purpose setup with trickery is 312 ( , , and ) for the recharge reduction plus the generation of , , , and .

Any skill that you can reactivate to return to a previous location such as the utility skill and the sword 2 skill will cleanse a number of conditions off of you on return. The weapon skill can be spammed to trigger multiple cleanses in this manner, so make sure to take advantage of that if you use on a sword.

All of your Venom skills, upon activation, will be applied to up to 4 additional nearby targets. In addition, any conditions that are applied by your allies using your Venoms will deal damage relative to your condition damage stat, not the other person’s. Make sure to activate your Venoms in close proximity (240 radius) of your allies, especially while using to break the enemy’s Defiance Bar.

There are some stolen skills that can be utilized in more than the ways listed in the tooltip. In addition, not all of the stolen skills you can generate during a fight with multiple different types of enemies will be useful in your situation. Through practice and repetition, you should be able to get a grasp of which stolen skills are useful and how they can be used in different ways. For example, the stolen skill not only gives you condition cleanses and , but it also spawns a water field for you to use combo finishers with.

Some stolen skills in end-game content like or ,  are unique to a few encounters and give very powerful effects, making Thief very useful there.

Using skills that grant you is not the only way to conceal yourself from the enemy.

Effective use of combo fields and combo finishers  (explained in more detail in the Game mechanics guide) can get you out in a pinch, apply buffs to yourself, and harm your enemies in many ways.

While not unique to the Thief, “Blasting Stealth” is commonly done by or with this profession as they have very good access to Smoke Combo Fields. you can use Blast finishers like on your short bow into the Smoke Field created with or , this will apply to all allies standing in the field.

You can also give to only yourself by using Leap Finishers in the Smoke Field. Spamming in a Smoke Field (ideally against the wall), is a very common way of stacking long duration shortly before engaging an enemy in competitive game modes like PvP or WvW.

To supplement your ability to hide in the shadows, Thieves’ movement skills are unparalleled in the game.

This is especially useful in competitive game modes, where taking the enemy by surprise can create an enormous advantage.

Movement skills include , , , , and your profession mechanic .

If you are ready to start playing this profession, we recommend a starter build that was created to help with the traditional leveling experience of the core profession.