Enrage: 7 minutes. When Enraged, the updrafts around the arena will disappear and Gorseval will deal 200% more damage.
Tank: Toughness
Requires: Updraft Use Mastery

Gorseval aggros on a toughness tank. No special utilities are required for this role, however, as , , and are useful here, Firebrands with and Druids with (Staff 4) and are common tank choices.

Gorseval comprises three main phases with two additional split phases at 66% and 33% of its health remaining. The boss will add a new mechanic with each phase.

The tank should point Gorseval away from the squad and keep him stationary. At the end of split phases, the tank can return to Gorseval early to ensure he doesn’t walk towards the stack.

Occasionally, adds will spawn around the arena, knocking down players and potentially stripping . such as (Focus 4) should be used to clear them out when possible.

Gorseval has two auto attacks: a Swipe and a Slam. Slams only ever happen after Swipes.

The squad should stand behind Gorseval to avoid each Swipe, but be prepared to  or apply or for each of his Slam attacks, as they will players.

effect that reflects damage back to the attacker, and will spawn patterns of black goop around the arena.

Every few seconds, the goop will detonate, dealing large damage and applying 25 stacks of to any players inside it. This explosion cannot be .

During this phase, players should use crowd control skills on the boss, avoid using skills with high burst damage to avoid dying to the

damage reflect, and aim to avoid standing in the goop.

Commonly, squads with adequate DPS utilize a “Fast, Fast, Slow” strategy during the breakbar phases. In this strategy, the squad should quickly break the first two defiance bars, but should wait to break the final defiance bar until Gorseval’s health has reached about 18%. This offers players more leeway to kill Gorseval before the final World Eater. Any classes that can utilize damage negation or heal-on-hit effects like should use them when doing the “Slow CC”.

After breaking Gorseval’s defiance bar, players must DPS Gorseval to a health barrier—66%, 33%, or 0%—or else deal with Gorseval’s ultimate attack.

If Gorseval has not been phased by the end of his attack pattern, he will channel World Eater, an expanding red area of effect. If this attack reaches the edges, any player standing in the arena will be instantly defeated.

Players can avoid this attack by either DPSing Gorseval to a one of his health barriers or by destroying a section of the wall around the arena, gliding to one of the four updrafts surrounding the platform, and returning to the platform after World Eater has completed.

While most squads have adequate DPS to ignore the World Eater mechanic, if the squad has lower DPS, has lost players, or has struggled with mechanics, the squad may need to break a wall. In this case, all players should run to one wall, break it down, and glide to an updraft. Each updraft can only be used one time, so the squad must move to a new updraft each time.

At 66% and 33% HP remaining, Gorseval will become invulnerable and four Charged Souls will appear, slowly walking towards him. If a Charged Soul reaches Gorseval, he will channel a World Eater attack.

, , and should be used on the Charged Souls to give the squad adequate time to kill them before they reach Gorseval. 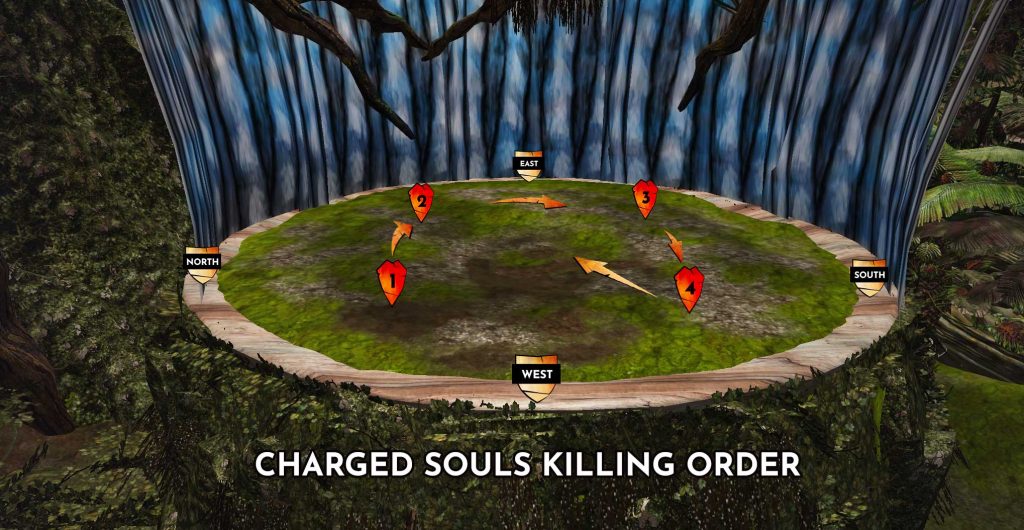 Starting at 66% HP remaining, dark orbs known as Spectral Darkness will spawn around the arena. These orbs slowly expand their area of effect over time.

Touching an orb’s AoE will apply 10 stacks of the

Spectral Darkness effect to that player, which reduces outgoing damage and increases incoming damage by 10% per stack; players under its effect will also have a icon of a pale ghost above their character’s head.

To remove accumulated stacks, players must first destroy an dark orb, which will then spawn two golden energy orbs on the ground to pick up: each will clear 5 stacks of

All players with ranged damage are responsible for clearing any orbs that spawn close to Gorseval and the Charged Souls—don’t assume that someone else will do it! If you are afflicted with

Spectral Darkness, prioritize cleansing it over anything else, as the debuff makes your contribution to the raid extremely low.

Starting at 33% HP remaining, Ghastly Prisons will spawn under every player and attempt to trap them and lock their skills. This attack cannot be or blocked.

If any players are caught, they can be broken out by using their Weapon Skill 1 key and with cleave damage from the rest of the squad.

To deal with this mechanic effectively, the squad should stack tightly before the eggs spawn, and once they appear, players should sidestep out of their range.