The Elementalist is one of the more complex professions in the game.

By swapping between four elemental magics, fire, water, air, and earth, an Elementalist can provide power and condition damage, as well as healing and boon support.

The weapons an Elementalist can wield include a Staff, dual Daggers, a Scepter, and a Focus.

Unlike other professions, your choice of stats (e.g. power damage, condition damage, or support) do not restrict

For other professions, the choice of stats (e.g. power damage, condition damage, support) restricts which weapons are viable. Elementalists have more flexibility.

While there are better weapons for each role, due to having four times the weapon skills, thanks to the four elemental attunements, it’s possible to use the same weapon type in different builds, and alter the weapons stats and prioritized skills.

If you don’t know anything about Guild Wars 2 professions and are looking for a short comparison, check out our introductory guides:

While this is not mechanic specific to Elementalist, it’s worth mentioning Auras here, because this profession has amazing access to this type of effect.

Aura is an effect temporarily surrounding a player and providing some effects, usually when the enemy hits and/or passive bonuses. Some Elementalist traits will enhance existing Aura effects or add new ones. 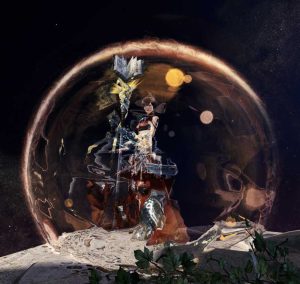 This profession has access to 4 out of 7 existing Auras in the game (excluding any Aura created with a Combo):

The main feature of the Elementalist profession is the ability to attune 4 different elements: fire, water, air, and earth.

Attuning to these elements means all your weapon skills (and Glyph skills) are transformed into different ones with separate functions.

There is a global 1.5-second cooldown before attuning to another element, but the element you attuned from will not be able to be entered again for 10 seconds.

This mechanic. however, comes at the cost of not being able to during combat.

What’s unique to Elementalist is that most weapons can be used by power, condition, and support builds due to interaction with profession mechanics.

Let’s use Staff as an example of how Weapon skills change based on attunement.

The Fire element is all about damage (both power and condition damage with ). The common aura gained with this element is .

The Water element’s main function is to heal your allies and give them a few boons as well. Offensively, water focuses on power damage and the condition. commonly acquired in this element.

Air focuses on dealing quick and deadly power damage, stunning your enemies, and providing different boon options like and/or . You gain good access to in Air.

Earth element is the main defensive elemental attunement, providing projectile reflection, , and . Offensively, the earth aura focuses on condition damage with the condition. The common aura gained with this element is .

Arcane utility skills are not representative of a single element. They channel raw, magical energy to provide offensive and defensive via different functions. In addition, with the exception of the heal skill, each arcane skill has no cast time.

This skill type is rarely used not only by end-game builds but also in Open World and leveling builds, while most abilities are inferior to other choices, sometimes is taken for good instant damage and for amazing defensive potential and a .

Cantrips are small-scaled showcases of elemental power. These selfish skills are meant to empower you on the fly and are usually used as a reaction to situations around you rather than part of your damage rotation.

Due to that strong responsive nature, Cantrips are often played in PvP, which is a very dynamic game mode that requires quick reactions.

, , and  are especially worth considering when creating a build for competitive game mode.

The selfish nature of Cantrips doesn’t make them valuable picks for end-game larger-scale content like Open World, instanced PvE, or WvW, but for solo play and leveling, you might absolutely consider using for defense or  for mobility.

Conjure skills allow a weapon of pure elemental energy to be summoned into your hands and to a target location for your allies to wield (or for you to wield a second time later) for 30 seconds.

Additionally, you gain specific stat bonuses depending on which conjured weapon you are wielding.

With multiple elite specializations available, Conjures retreated into the shadows a bit.

Some of them still are used by some end-game builds, especially , followed by are very powerful for PvE end-game, and is a great defensive ability for PvP due to the abundance of strong defensive abilities.

Glyphs have a base functionality that changes slightly depending on what element you are attuned to upon use.

This change can be as simple as providing different boons and as unique as producing a completely different effects.

Most popular in PvE is in (producing ) used by some power builds, and in used by condition-based builds.

is a powerful tool for downstate manipulation, especially in dynamic competitive game modes like PvP, where all four versions of this skill under each attunement will have a different use case, from teleporting a single ally to you and reviewing them, to group reviewing allies around you.

For Open World, is a powerful semi-passive elite of many uses, from healing to crowd-controlling enemies.

Signets are skills that have a passive effect and an active component. The passive effect will remain available to you until you use the signet’s active effect, forcing you to wait until the skill is able to be used again for you to benefit from the passive boost.

The most popular signet in all game modes is , very good passive healing on each cast, on a profession that’s very spammy, it will keep you alive also in Open World as long as you keep attacking.

For its passive effect, is very often taken on power PvE builds to reach 100 Critical Chance. In competitive game modes (and in Open World if you don’t have access to a mount) is a strong utility with a powerful active component that not only acts as a  but also and applies .

The Fire specialization focuses on boosting , increasing power damage and amounts of , and cleansing conditions.

All traits are actively used by multiple offensive builds from all game modes, making this a must-have specialization.

In competitive game mode Fire is used for defense-by-offense gameplay with , , and .

is also a great damage-boosting trait favored by solo Open World players and PvP or roaming WvW builds where you are often alone.

In the Water trait line, you’ll be rewarded for going in by increasing your healing, but this specialization also offers multiple effects independent from current attunement, most noticeably aura sharing, improving your Cantrips, additional condition cleansing.

The traits to consider to boost your healing/cleansing capabilities are usually 3×2 with  , and , with or depending on the build. And if you are not playing as “Auramancer”, will be an extremely good option for a healer too, requiring you to enter   off-cooldown.

The air specialization is all about power damage, critical strikes, and other utility relating to mobility and Crowd Control.

The big power damage setup used by power dps builds in PvE content is 32x including , , and either or depending on your playstyle.

Competitive players will often go for mobility traits ( or ) and traits synergizing with CC (Crowd Control) such as and .

The earth specialization focuses on small condition damage improvements and personal defense, as well as on keeping allies safe with and enhancing your Signets.

The arcane specialization doesn’t focus on one specific element, instead, it’s enhancing swapping between the 4 elemental attunements frequently in combat and is most popular in competitive game modes, and due to the large number of boons it provides is often used by support builds in PvE.

Competitive players focus on the setup involving , and situational Adept and Grandmaster traits like , , , .

One of the most advanced mechanics on Elementalist is mid-cast attunement swapping.

Your attunements are instant casts that don’t interrupt any other cast, meaning you don’t need to wait for your skill to finish casting before you can swap attunements.

This is used in more advanced rotations to give you split seconds after each element change that you would normally take to wait for the cast to end and only then swap your element.

In you would cast and to then swap to to cast something.

With this method you can swap early during and wait for the end of the cast to then use other skill instantly, which normally would be delayed by waiting for to finish casting in and only then swap to .

Note: It may appear the skill in slot you used before mid-cast attunement swap is casting, but this is only animation, in reality, it’s casting in the background, and skill in the same slot after attunement swap will still be available once the cast of previous one is finished.

Due to different weapon types offering different ranges, in the early game you should focus on matching your skills, traits, and stats to your weapon of choice, as they will determine your playstyle.

Staff will be your classic RPG caster long-range weapon, your traits selection should match the “kill the enemy before it will reach you” philosophy long range with as many damage-increasing traits as possible (often at the expense of your survivability).

Scepter and Focus are offering mid-range skills, which should be supplemented by balanced traits offering some defense (most commonly Auras and some passive healing) and mobility allowing you to kite your foes.

Finally, Daggers focus on very dynamic melee combat which often requires some extra on-demand protection in form of multiple shields and evasions, while maximizing your damage as much as possible to quickly eliminate the enemy.

If you are ready to start playing this profession, we recommend a starter build that was created to help with the traditional leveling experience of the core profession.