This encounter benefits from stability and projectile destruction. Commonly these are handled by Firebrands with (Shield 5), (Tome 3 Skill 3), or by Revenants with .

Adina fixates on a toughness tank. While any class can tank this, having access to blocks, stability, or invulns can be helpful.

From the Leystone Axis players can head east. Here they will encounter five Pillars and an enemy earth elemental. The squad must kill this elemental to progress. 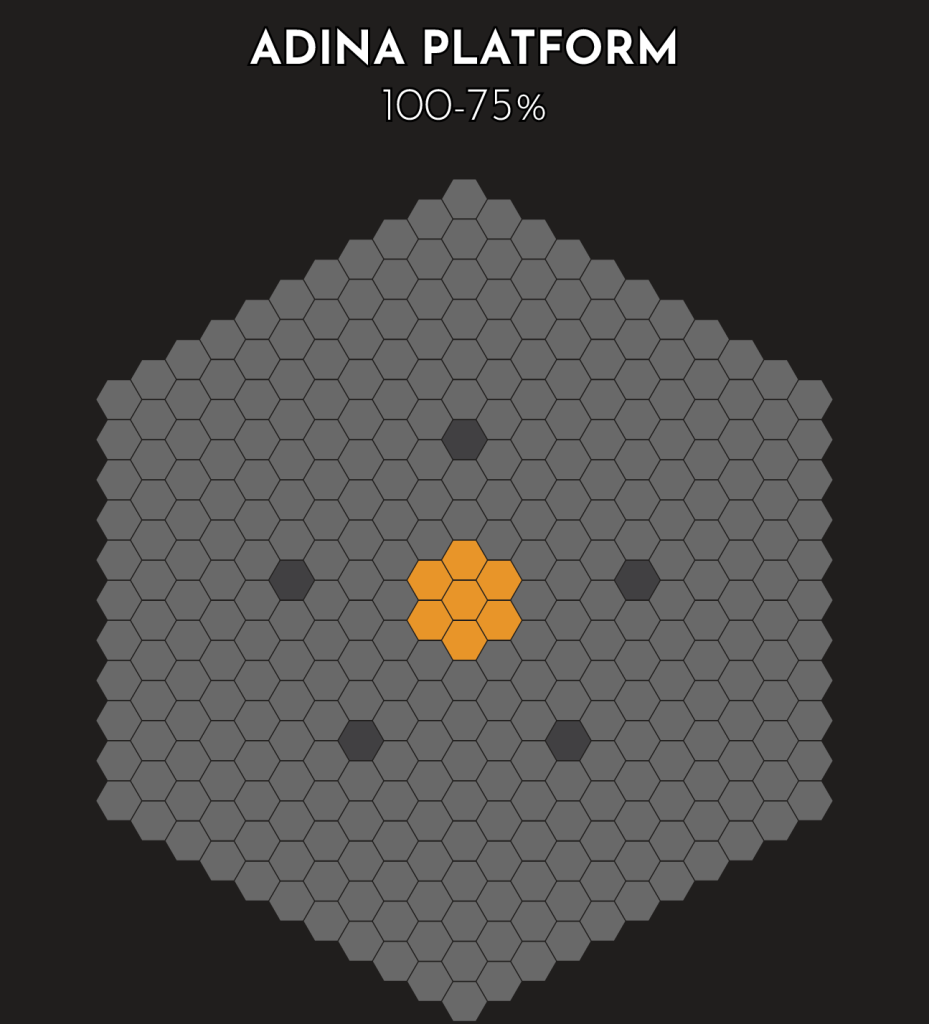 Adina will be standing in an arena composed of hexagonal blocks. Outside of the blocks is quicksand which heavily damages and blinds players.

Five Pillars surround Adina. Walking inside the circle made of the pillars will start the encounter.

Adina will start the fight with two mechanics: Diamond Palisade into a Boulder Barrage.

Adina will launch Diamond Palisade, damaging all players and Pillars. The damage from this attack can be negated by players staying mounted at the start of the encounter.

Instantly after the Palisade attack, Adina will gain a growing orange circle. When this reaches the edge of the arena she will unleash a Boulder Barrage. Any players hit by this attack will go downstate.

Each Pillar can tank two hits of Boulder Barrage. Therefore, to avoid dying to this attack, two players should stand behind each Pillar.

Throughout the encounter, players will need to hide behind their Pillars. To avoid chaos, players should remember which Pillar they originally stood behind. The exact locations of the pillars will move, so players can count which Pillar they stand behind from the Tank’s Pillar.

Commonly the tank will hide behind the “First Pillar” just to the left of their tanking position.

Note: new groups will often mark the platform and specific players to help everyone remember where their Pillars are. However, we don’t recommend this strategy as it makes it difficult to adapt if anyone dies or misplaces a Pillar. Instead, get used to remembering your Pillar order to adapt to any scenario.

Once Pillars have been broken, the squad can stack on Adina and DPS the boss.

Occasionally the five furthest players (excluding the tank) will be targeted with Tectonic Upheaval. These players will gain an expanding orange circle beneath them that when fully expanded will lock and place a Pillar.

Often groups will assign Pillar Baiters to bait this mechanic: five players who will stand slightly away from the boss to bait Tectonic Upheaval. These players must then back up, wait for the orange circle to lock, then quickly return to the boss. Usually, support roles and players with ranged attacks or high mobility skills will be chosen for this.

If a player remains on their Pillar circle at spawn they will be instantly one shot. Additionally, if a Pillar spawns too close to Adina any players standing near her will gain an uncleansable blind. Players targeted with Tectonic Upheaval must take these off of the boss to avoid killing or blinding the squad.

Finally, if a Pillar overlaps another Pillar one of them will be destroyed.

If you are not assigned to baiting Pillars but happen to get one anyways, you must react and adapt by taking your Pillar of of stack and placing it between the other Pillars to minimize confusion.

Soon after Tectonic Upheaval, Adina will do her Diamond Palisade and Boulder Barrage combination attack, with an added Radiant Blindness. She will raise her arms, say a voice line, and gain a shining Eye over her head. Any players looking towards her will receive a 20 second uncleansable blind. Everyone should quickly run to their Pillars and wait for this attack to end.

While you can keep uptime on the boss when she first says her voice line, the blind is extremely long and should be avoided at all costs. It is safest to just quickly run to your Pillar if you are new to the timing.

Adina will gain a buff for each damaged Pillar on the arena. If players fail to stack behind the Pillars they will fail to break those Pillars, building stacks of Pillar Pandemonium. Each stack increases her outgoing damage and decreases her incoming damage by 20%. Therefore if any Pillars did not break, the Pillar Baiters should break these with their next Pillar placements by placing a Pillar on an adjacent hexagon.

If two players are fully dead only four Pillars are required for the eight remaining players to survive Boulder Barrage. Therefore two Pillar Baiters should merge their Pillars to reduce the number of stacks of Pillar Pandemonium on Adina.

Pillar Baiters should reduce the number of pillars that spawn using this technique for every two dead players. So for example, if five or six players are alive, the Baiters should work together to ensure only three Pillars spawn.

Adina has a number of attacks that are completely avoidable by the squad and only handled by the tank. These include Perilous Pulse and Stalagmites.

An orange cone will appear in front of Adina. This will knock back any players in it if not blocked, dodged, or negated by .

The tank can simply block this knockback. All other players should never be standing in front of the boss.

Mines will spawn in blocks behind the tank. Touching these mines will cause them to detonate, heavily damaging players in range and destroying the ground beneath them.

Players should never walk through these mines. The tank can avoid them by standing in Adina’s hitbox and using or blocks to avoid being knocked into them.

Each time you will phase Adina, the platform layout will change: 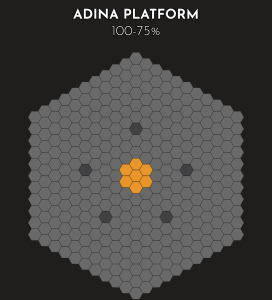 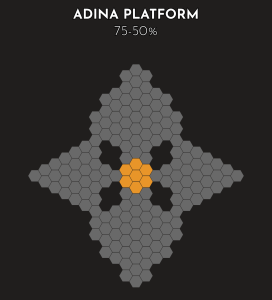 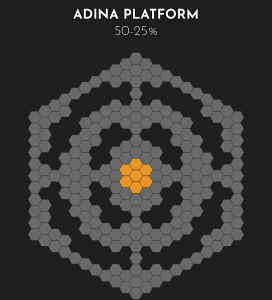 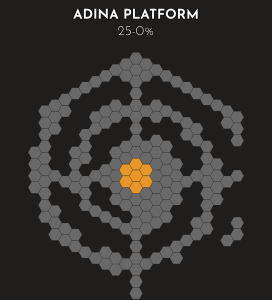 Every 25% Adina will become invulnerable and spawn a Sand Wall reaching from the south to the north of the arena and rotating counterclockwise. It will instantly kill anyone stepping in its path.

Players must run counterclockwise around the arena to avoid dying to the wall and should stop at the northwest of the arena. Arena itself will change slightly

After Sand Wall will complete a full circle, two Hands will spawn in corners of the platform: a Hand of Erosion and a Hand of Eruption. During 50% and 25% split phases, four of them will spawn, two of each type.

If your squad appears to be lacking projectile mitigation you must watch the Hand of Eruption and its projectiles. Otherwise, you will likely be knocked into the quicksand, and die.

Commonly during 50% and 25% split phases, the group will choose to start killing hands from the south-east so tank can get back to his starting position with Adina facing south without interfering with the group.

During each hands phase, between boss phases platform will change into more narrow layout: 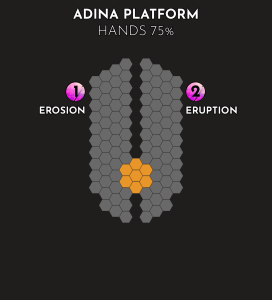 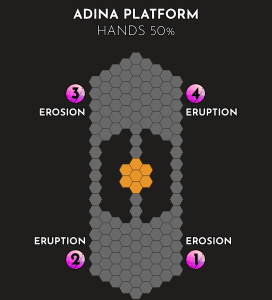 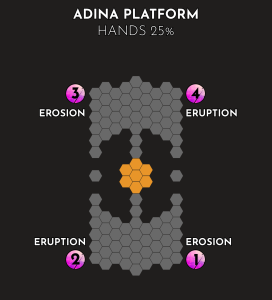 Walking from the south to the north requires players to walk a fine line. Players must use projectile mitigation or stability to avoid dying to the knockbacks from the northeast Hand of Eruption.

The bridge from the south to the north during last Hands phase will require a jump. Players should be extra careful about knockbacks from the northeastern Hand of Eruption, or can bypass this completely by using .

Apart from split phases, Hands of Erosion will spawn during the last boss phase. Players should aim to kill Adina quickly to prevent the vulnerability debuff from piling up. Projectile mitigation can help lessen the pressure from this debuff.