The fractal starts in the area similar to the Cliffside fractal walking towards the middle a cutscene will play that can be skipped and starts the first encounter of the fractal.

You will engage a group of enemies similar to those of Cliffside fractal. Upon reaching 50% health of those enemies, they will transform and have different attacks. Once defeating the mobs, a little box will become vulnerable that will be destroyed in a single hit. This will open a hallway to the right of the encounter.

Once the traverse through a hallway on your right and meet a jumping section. You’ll need to jump across to progress to the next section.

There will be enemies located on the jumping platforms that shoot knockback projectiles. Bring or  or some form of anti-projectile to assist traversing through this section.

After doing the jumping section you will come across an area similar to the Urban Battlefields fractal. In the middle you will see 4 golems, here will be the first boss of this fractal.

The 4 golems come with different sets of abilities

The Chaos anomaly fight has multiple phases and these affect the different golems, The last golem killed during each phase is the one that is eliminated during the next phase. But will power up the other golems in the coming phases.

Additional mobs will spawn during the encounter that fire projectiles that knockbacks players. sources or anti-projectile is recommended

Defeating the 4 veteran golems will spawn the Chaos Anomaly in the center of this area shortly after.

DPS the boss down to 75% and the boss will phase.

The boss will occasionally attach an AoE to a player called a flux bomb. When a player has a Flux Bomb, it’ll be a large growing AoE around a player. It’s advised the player move out of the group and drop the Flux Bomb. This will happen during all phases

The Chaos Anomaly will become invulnerable and 3 of the 4 veteran golems will come back. Defeat them to make the boss vulnerable. DPS the boss down to 50%.

The Chaos Anomaly will become invulnerable again and 2 of the 3 veteran golems will come back and become Elite enemies. Defeat them and DPS the boss down to 25%.

The Chaos Anomaly becomes invulnerable for the final time and one of the 2 Elite golems will come back and become a Champion. Defeat the champion then kill the boss.

The gate will open. Go down some platforms into a bonfire area 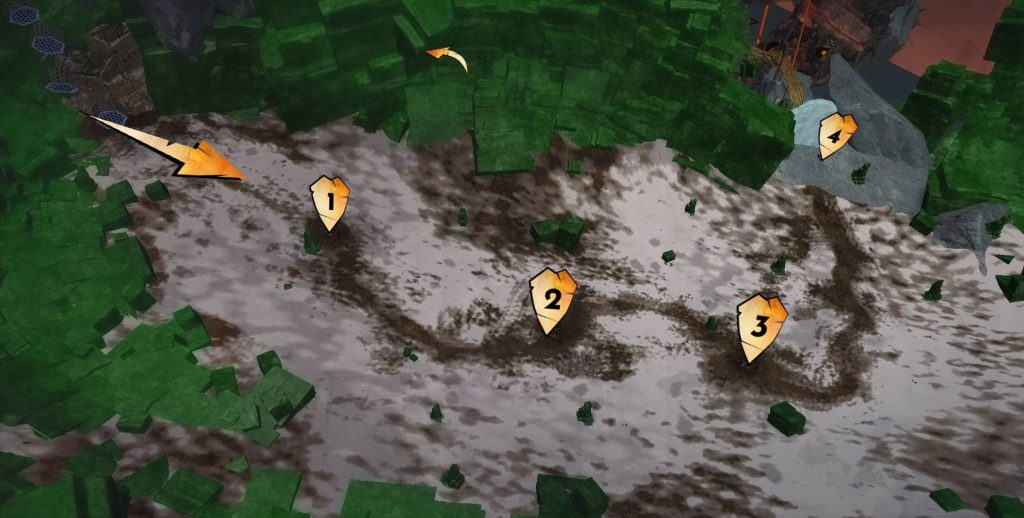 Light all 4 bonfires while avoiding the invincible Jade Maw Tentacles that have knockback abilities, and the invincible Legendary Flame Devourer that will try to put out the lit bonfires.

When all 4 fires are lit, a glacier at the end of this room will break and you’ll then head to the final boss.

The Brazen Gladiator resides on a platform that is made of the electric floor from the Aetherblade fractal, with the hanging weapon test weights from the Molten Furnace fractal. The Brazen Gladiator spawns with Protective Shielding buff. Lure the boss onto electric tiles on this platform in order to remove the buff. DPS the boss when the buff isn’t present.

The third auto-attack on Brazen Gladiator chain dazes. You should be able to get out range for the 3rd swing, dodge, or ignore it with . and blocks will NOT protect you from this attack

Starting at 55% health the boss will begin using a powerful pull and spin attack. It’s a large AoE that is possible to move out of but it’s recommended to break his defiance bar.

At the higher fractal levels, the hanging weapon test weights will also drop periodically, and release a shockwave that will knock down players while additional mobs will spawn during the encounter that fire projectiles that knockback players just as in earlier sections. sources or anti-projectile is recommended

The platform lights up in different sequences, take note of where you also stand to avoid as much damage as possible.