This guide will walk you through each item and step required for the two Envoy Armor achievements. Envoy Armor I: Experimental Armor is unlocked when you open your first raid boss coffer. Envoy Armor II: Refined Armor will be unlocked after completing Envoy Armor I.

Starting from the Ley-Line Confluence Waypoint copied, go north to Nuhoch Lane. You will find a cave entrance on the east side. Inside this cave is a platform where multiple earth elementals spawn. 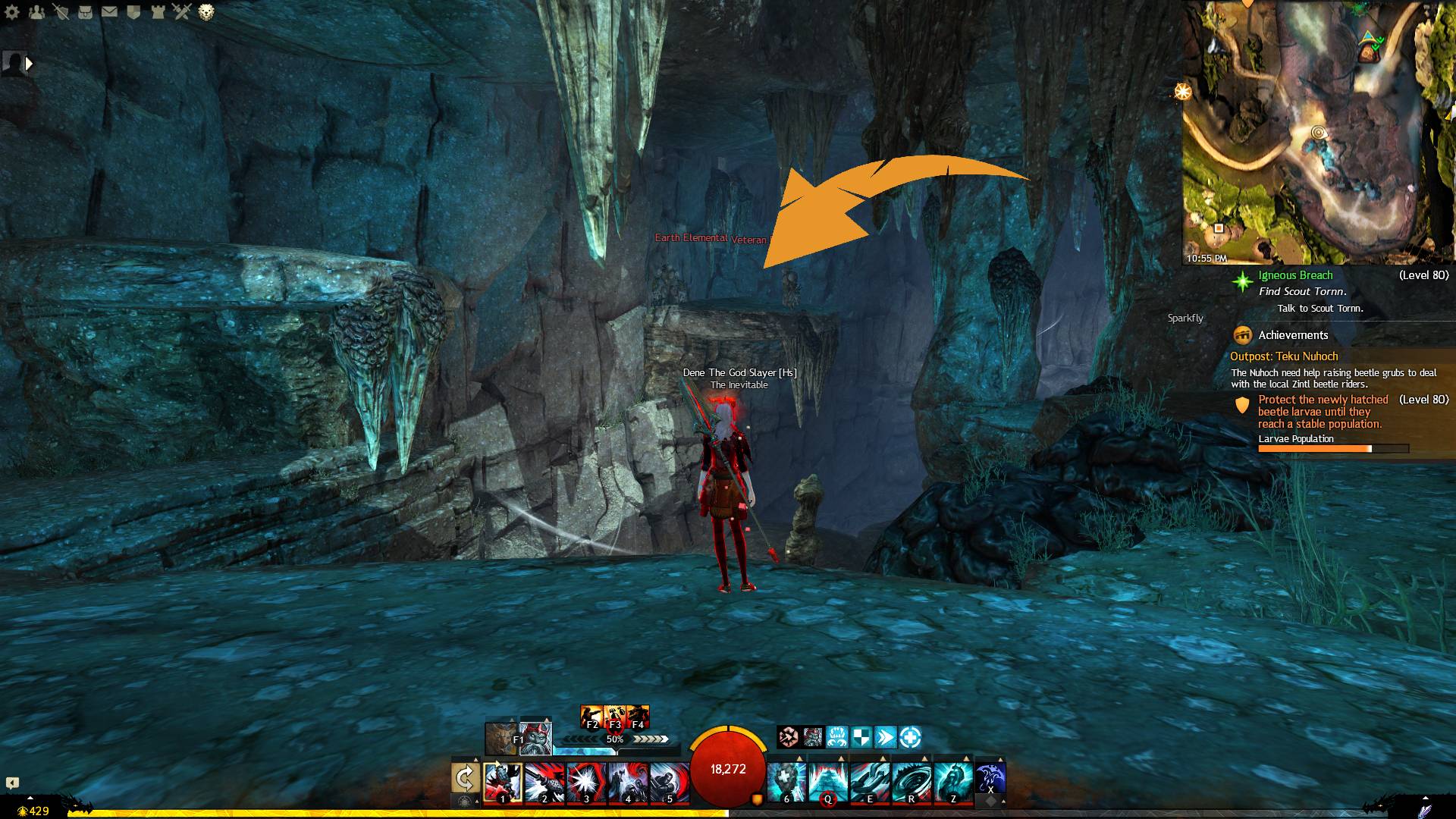 Bring this crystal to the Spirit Vale (Wing 1) and kill the Vale Guardian. Once cleared, interact with one of the three pillars around the Vale Guardian’s arena to capture its energy with your living crystal. This will transform the crystal into an Infused .

Vale Guardian
This fight comprises of a short pre-event that introduces the main mechanics of the fight, as well as the boss fight itself. This encounter requires some condition DPS and boon strips, and has high healing pressure.

A can be acquired from the temple north of Northwatch Waypoint copied in Auric Basin. Speak to Burnisher Kengo and he will give you the mirror.

Note: Burnisher Kengo will not speak to you during parts of the Auric Basin meta. All mirrors must be activated and the event “Collect sediment from the fallen Exalted for Arcanist Mariette” must be finished.

Bring to Spirit Run in the Spirit Vale (Wing 1). 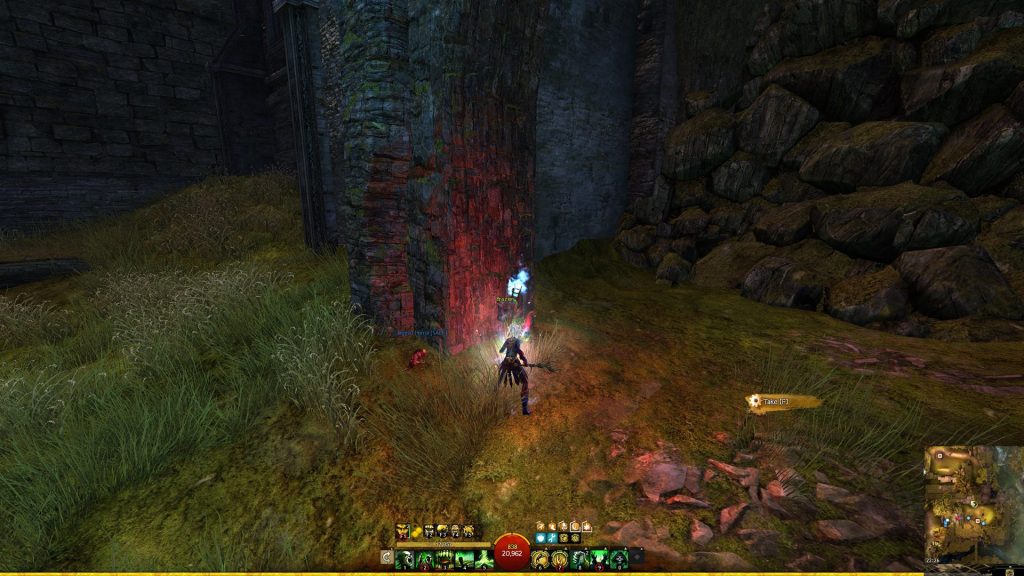 Before starting the event, one member in your squad must carry the spectral torch. This player must carry this torch to the end of the cemetery – if they are downed or weapon swap the torch will disappear, forcing you to wait for a week to infuse your Soul Mirror. Typically this means a class that relies heavily on its utility skills and isn’t bursting down walls will carry the torch, such as an Alacrity Renegade. 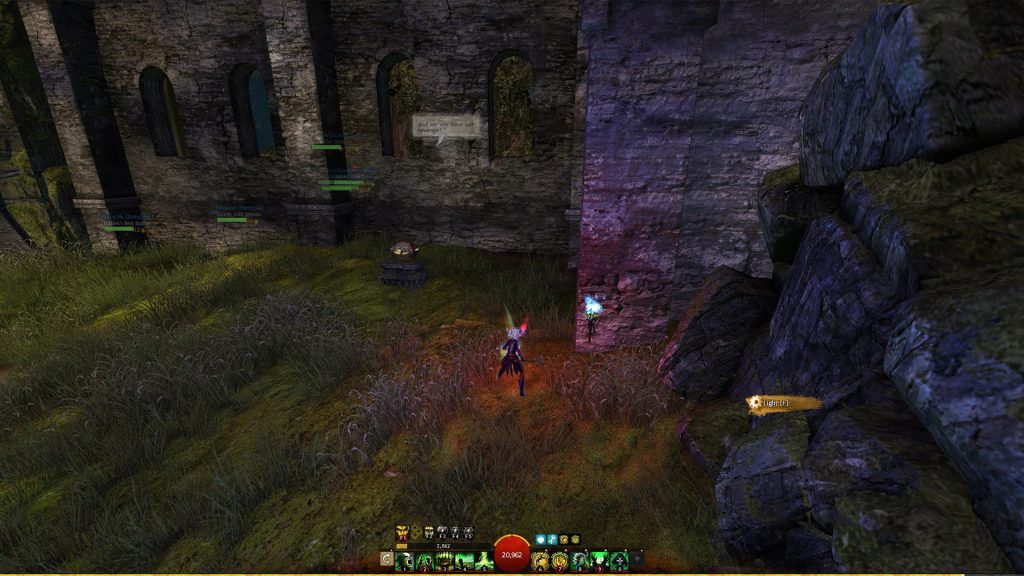 Once the Cemetery has been cleared, the torchbearer can interact with a brazier next to a mushroom to the right before Gorseval’s Perch copied. Once placed, interact with the brazier with the  in your inventory to get the .

Note: A chest will spawn near the lit torch. Looting this chest is not enough, you must interact with the brazier. Additionally, leaving and reentering the instance will remove your eligibility. Remember to bring your uninfused Soul Mirror!

first, you need to buy a Polished Aurillium from any Faction Provisioner, once acquired using the item during or before Navigating Through the Twisted Castle event and gaining 18 stacks of Madness will grant

Twisted Castle
In this encounter, players must traverse a labyrinth, hitting buttons to open doors blocking their path. This encounter has no requirements, but benefits from stability, stunbreaks, and the Forsaken Thicket Waters mastery.

You will acquire an from defeating the Vale Guardian.

Vale Guardian
This fight comprises of a short pre-event that introduces the main mechanics of the fight, as well as the boss fight itself. This encounter requires some condition DPS and boon strips, and has high healing pressure.

Bring this crystal to the inner chamber of Tarir. Approaching Glint’s Egg will bring up a dialogue box, transforming your crystal to an automatically.

The Spirit Weave is constructed from five , dropped from Gorseval the Multifarious. Gorseval will only drop one per weekly raid clear, so it will take you a minimum of five weeks to collect all the Spirit Threads.

Gorseval the Multifarious
Gorseval is the second boss of Wing 1. This encounter is relatively straightforward, but benefits from stability, pulls, immobs, and cleave.

Killing a Chak Gerent during the meta event in Tangled Depths will energize one in your inventory. Double clicking a stack of five  will transform them into the .

Note: While each Chak Gerent kill only energizes one spirit thread, you can kill multiple Chak Gerent in one meta cycle. Tagging all four Chak Gerent successfully will allow you to energize four Spirit Threads in a single meta event.

Ten can be combined to a  by double-clicking. Ectoplasmic Residue is looted from the hidden chests in Spirit Vale (Wing 1), Salvation Pass (Wing 2), and Stronghold of the Faithful (Wing 3). 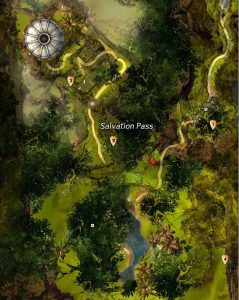 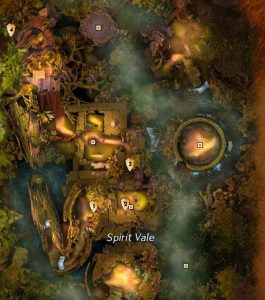 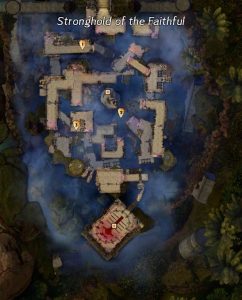 Stronghold of the Faithful

The is looted from Sabetha the Saboteur’s chest after her defeat.

Sabetha the Saboteur
This fight requires a few special roles and can be especially confusing for new players. With this guide you will learn how to deal with this flawlessly.

is looted from Matthias Gabrel’s coffer after his defeat.

Looting the chest at the top of the Inner Chamber of Tarir, where the Sanctum Scramble Adventure ends will give you . You don’t need to do the adventure, but it can give you some mobility options if you do not have a mount.

Once both items are acquired, consuming either one will transform them into .

The Champion Mushroom Emperor near the Order of Whispers Outpost copied drops a .

Slothasor in Salvation Pass (Wing 2) will drop a .

Get one and one from your material storage or the Trading Post. Consuming either the or the with all four mushrooms in your inventory will create a .

A destructible Giant Beehive is located high in a tree at the southern end of the body of water next to the Prison Camp in Salvation Pass (Wing 2). Shooting it down will spawn an interactable in the water below which gives you the required item. 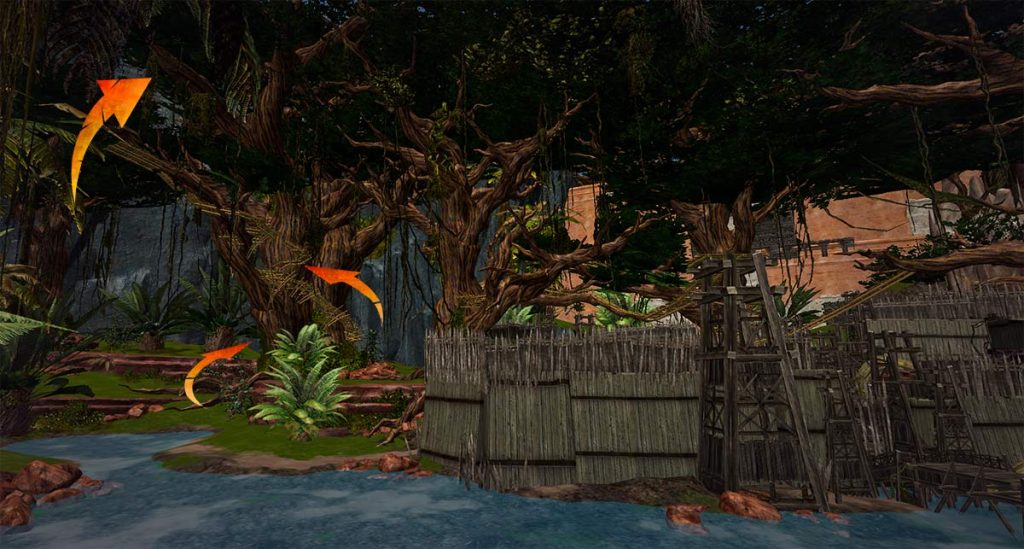 The Giant Beehive can be accessed by a mini jumping puzzle. This starts at a tree with a wooden path surrounding it at the southwest side of the map. Jump your way up to the top of a platform with a spirit standing on it who disappears as soon as you step on the platform. Look up and you will spot the Giant Beehive. Use a long-range attack to shoot it down.

After killing Matthias Gabrel, walk into any of the four fountains in the temple and a dialog box will appear.

Note: This can only be done in an instance where you just killed Matthias. Leaving and rejoining an instance, or joining someone else’s instance will not work, you will need to kill him again.

After acquiring , , , and consume any one of these to create a .

is looted from Matthias Gabrel.

First, you need to get from McLeod the Silent’s Chest, obtained by completing the Escort event in Stronghold of the Faithful (Wing 3).

Bring this battery to Rata Novus and make your way to the Rata Novus Commander Center copied by going through this tunnel: 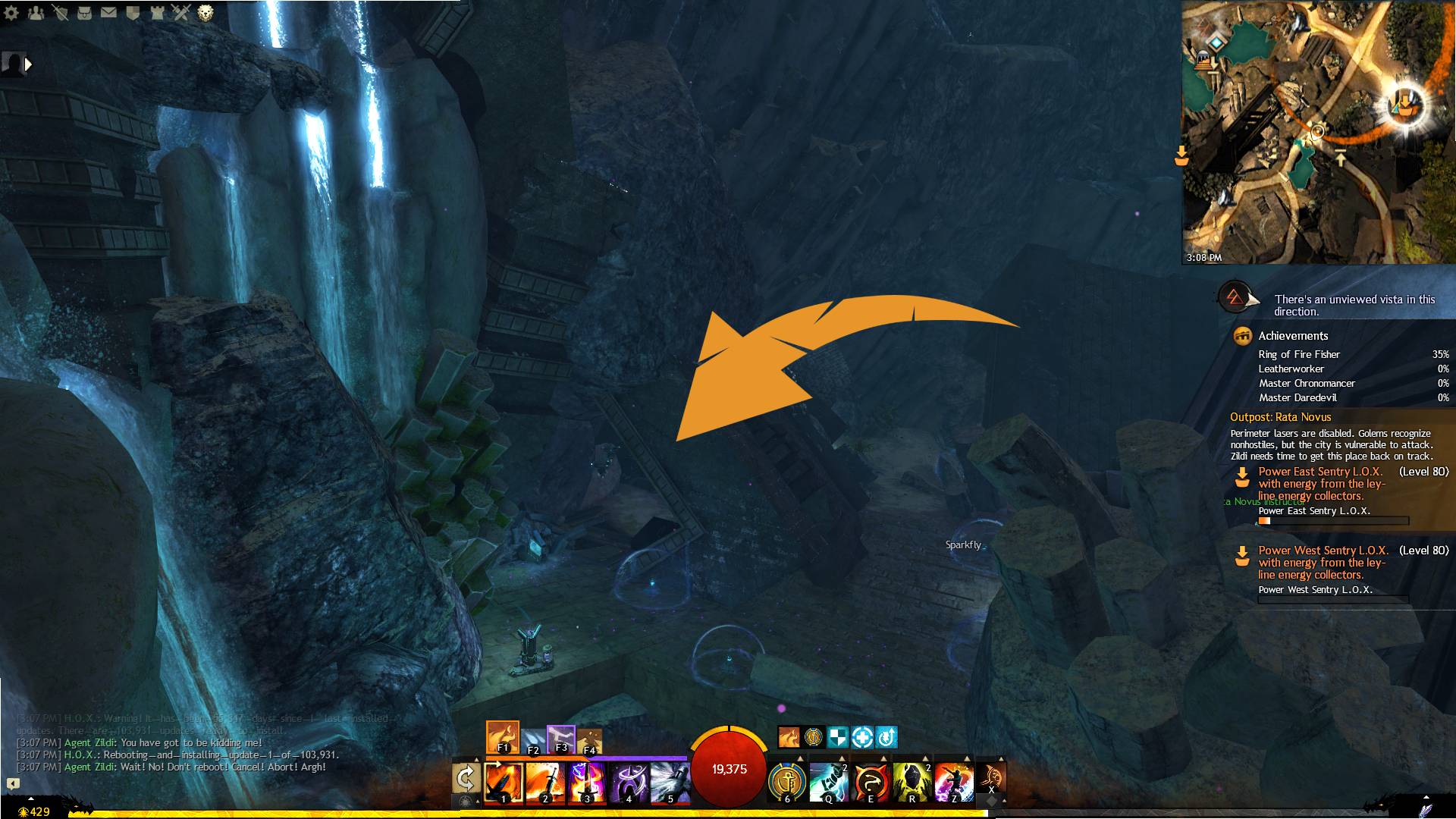 If the command center is not retaken, there will be a lot of deadly turrets and lasers. These can be bypassed by running through quickly on a mount, or by completing the Building Rata Novus Back up event chain.

Once you go inside, go to the second floor and interact with the socket to get .

Soul of the Keep

Collect a after defeating Keep Construct.

Next, find yourself a Veteran Chak Lobber or Chak Slinger and get hit by its Goop attack. Consume the while under the Goop effect to get the .

Purchase from an Itzel Mastery Vendor or Xochitl for 100 and 1 gold, then use it while killing the Keep Construct.

Twisted Castle
In this encounter, players must traverse a labyrinth, hitting buttons to open doors blocking their path. This encounter has no requirements, but benefits from stability, stunbreaks, and the Forsaken Thicket Waters mastery.

The is looted from Xera’s chest after her defeat.

Xera
Xera is the final boss of Wing 3. Xera is the most difficult boss in the wing, and requires all players have Ley Line gliding. Additionally, players benefit from the Forsaken Magic mastery.

Upon completing Envoy Armor I: Experimental Armor you will obtain a chest of stat-selectable armor. This is not your precursor set. Generally, it is recommended to select a weight of armor (Light, Medium, or Heavy) that you do not plan to start with for your Legendary Armor. This is because of the Legendary Armory.

After participating in the “Battle for Tarir” meta event in Auric Basin, use the Crystalline Heart in your inventory.

Note: Battle for Tarir does not need to succeed.

After completing the Volcanic Fractal use the Crystalline Heart in your inventory.

After completing the Snowblind Fractal use the Crystalline Heart in your inventory.

Use the Crystalline Heart after getting hit by the “Wing Buffet” skill from a Wyvern.

There are Four Wyverns that work for the Windy Heart:

All of these Wyverns have similar “Wing Buffet” animations. Here is one example from the Qadim encounter.

After completing the Aquatic Ruins Fractal use the Crystalline Heart in your inventory.

In Dragon’s Stand where the final fight against Mordremoth takes place go underneath the platform numbered 5 and use the Crystalline Heart while standing on the lowest rock. 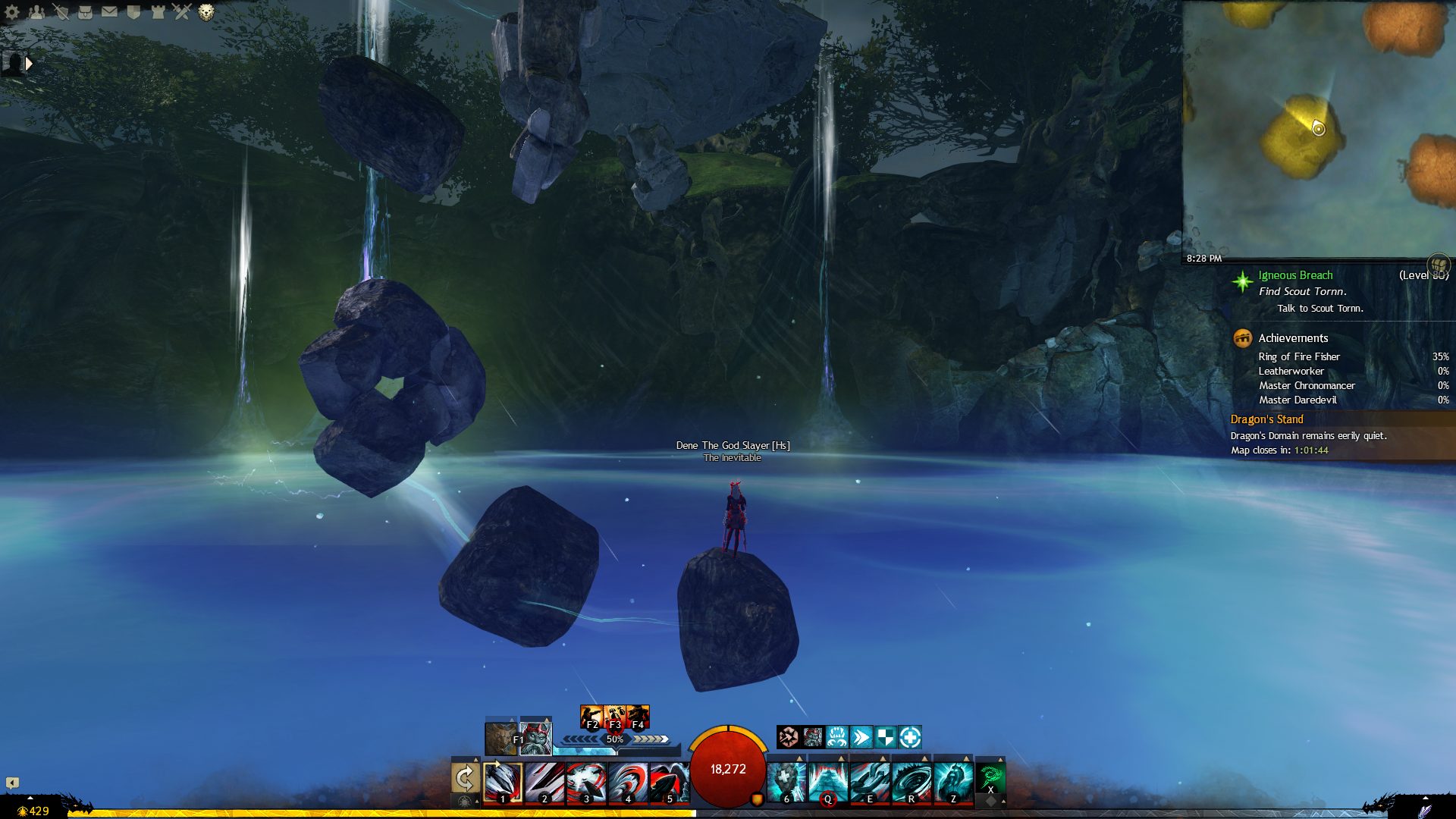 While standing at the Flax Node Farm in The Great Tree use the Crystalline Heart.

While in the Bastion of the Penitent (Wing 4) use the Crystalline Heart.

Activate the Crystalline Heart before starting the fight with Cairn the Indomitable in the Bastion of the Penitent (Wing 4) and beat the boss fight without getting hit by Spatial Manipulation by standing in the green circles.

Note: Many groups will ignore the green mechanic. Your eligibility for Jade Heart will disappear if you do not successfully do the mechanic, or if you go down during the encounter. This means you must either look for greens that only require one player in them to protect from Spatial Manipulation, or get assistance from your squad. Alternatively, the Challenge Mote version of this encounter forces people to do the green mechanic, which may make getting the Jade Heart easier.

Activate the Crystalline Heart before starting the fight with Mursaat Overseer in Bastion of the Penitent (Wing 4) and manage to kill the boss while getting the Protect buff at least once during the fight.

Note: Often Protect isn’t required for a kill. Tell your Protect player to be sure to use it, and stick with them to be sure to get the buff.

Activate the Crystalline Heart before starting the fight with Samarog in Bastion of the Penitent (Wing 4) and get hit by the explosion which occurs from Rigom dying.

Experienced groups will typically push Rigom under Samarog before his first explosion. Tell your group if you need to be caught by this explosion so they will let him detonate before pushing him under Samarog.

Activate the Crystalline Heart before starting the fight with Deimos and survive the entire encounter.

After completing all the other hearts head to the Tree of Solitude copied and /kneel in front of the tree. This can be in any cleared instance.

Completing the Envoy Armor II: Refined Armor collection, will give you a weight-class set of stat-selectable ascended armor. This armor set is a precursor to your Legendary Armor. Select the weight of your planned Legendary Armor set, and whatever stats you want. If you select the incorrect stat do not change its stats in the Mystic Forge. This will transform your precursor into a non-precursor ascended armor.

The other two precursor sets can be crafted by level 500 Armorsmiths, Leatherworkers, and Tailors for Heavy, Medium, and Light armor respectively. The recipes for each precursor can be purchased from Master Craftsperson merchants such as the Master Armorsmith merchant in Lion’s Arch.